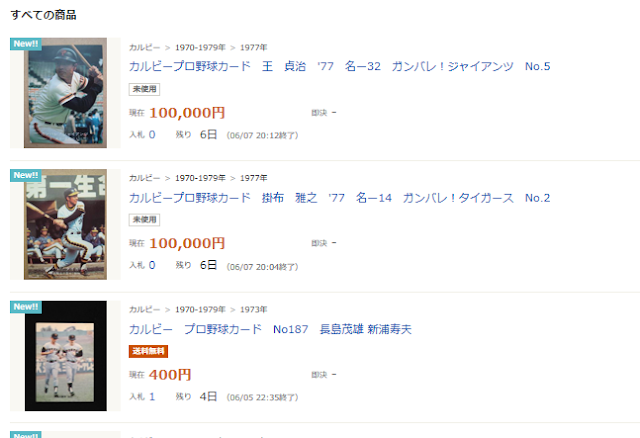 Looking back at the post seven years later what really caught my attention were how few listings there were for 1970s Calbee cards back then compared to now.  I hadn't really sensed any trend towards more Calbee cards being available, but perhaps that is because it happened too gradually to be noticeable.

I have to mention an important caveat though.  To check the numbers today I just took the shortcut of looking at how many listings there were under the category for that year (which has problems that I've written about before).   Back in 2013 according to what I wrote I manually searched through the whole site using keyword searches. I don't remember why I chose that cumbersome method, its possible they just didn't have the categories back then since I think if they had them I would have used them (I don't remember when they introduced categories for individual card years, but I wouldn't be surprised if it was 2014 since there are no categories from 2015 onward).  Anyway, the different methodology I used creates a problem since my 2013 method might have undercounted  (by missing cards that didn't turn up in my keyword searches) while my current method might overcount (by including cards erroneously categorized), which could mean the changes aren't as drastic as they look in the above table.

That noted, I think its probable that a large part of the change is due to more cards actually being available rather than just the result of methodological error.  And it is quite a bit.  Calbee cards from 1976 and 1977 (which are comprised of more than one set) in particular seem to be way more abundant on Yahoo Auctions now than they were then.

I'm kind of curious about why this is.  Yahoo Auctions wasn't new in 2013, it had been around for years and was well established at that point, so it wasn't like it was a brand new market that had just jumped onto the scene and there were fewer cards simply because people hadn't taken it up yet.

One possibility (which I like) is that collecting vintage Calbee baseball cards has become more popular in Japan over that time and this is a result of that.  I do get the feeling this is the case, while I hadn't noticed the trend towards more cards being listed, I have noticed a trend towards more people bidding on cards (and bidding them higher) than they used to.  The higher prices may also be attracting more people to putting cards up for sale than used to be the case.

Another related possibility is that brick and mortar store dealers are putting more cards up than they used to.  The number of such shops has thinned out a bit (at least here in Nagoya) in recent years, and probably Yahoo Auctions has played a big role in that.

Anyway, whatever the reason its kind of cool to see that there are more vintage Calbee cards available now than there used to be.  If I'm still maintaining this blog in 5 years I'll probably revisit this post to see what the numbers are like then!
Posted by Sean at 8:26 PM