Warren Cromartie and Bill Gullickson: A Card From Another Era 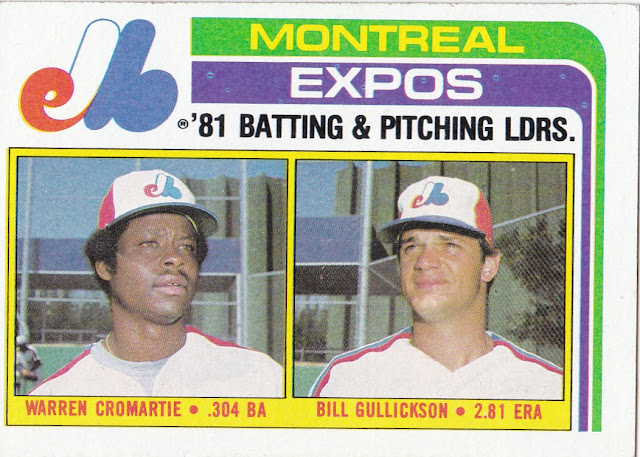 I have a few international baseball card trading relationships which usually involve Americans sending me American cards (mostly of the Montreal Expos, my favorite team) in exchange for Japanese ones.  Jay, who doesn't have a blog I can link to, is one of them and he sent me an envelope recently that included this 1982 Topps card featuring Warren Cromartie and Bill Gullickson, the Expos' leaders in batting average and ERA in 1981.

This card has a pretty strong Japan connection since both of these guys would be re-united as team mates with the Yomiuri Giants a few years later.  Cromartie played for the Giants from 1984 until 1990, and was joined by Gullickson in two of those years (1988 and 1989).

I had a thought when I saw this card that it was possible that not only were they team mates, but perhaps they both also led the Giants in batting average and ERA together, thus recreating their performance with the 1981 Expos depicted on this card.

Gullickson had a really solid year in 1988 and finished 8th in the Central League in ERA, but unfortunately didn't lead the Giants, finishing second to Masumi Kuwata.  In 1989 he fared far worse, with his 3.65 ERA not coming even close.

So while they came really close to re-creating their 1981 team leading combination, they weren't quite able to pull it off.

Despite that unfortunate near-miss, the card is also interesting because both of these guys bucked the stereotypes of American baseball players who made it big in Japan, which usually follow one of two models:

1) Washed up former big leaguer nearing the end of his career who wants to extend his playing days (and paydays) a bit longer.  Guys like Willie Davis, Frank Howard, Reggie Smith and Bill Madlock come to mind.

2) Really promising younger guy who tore it up in Triple A but was never able to break in to a regular spot on an MLB team.  Guys like Randy Bass, Boomer Wells or Tuffy Rhodes.

Neither Cromartie nor Gullickson fit either of these.  They were both established major leaguers who were still in their prime when they came to Japan.

Cromartie had been a solid and consistent starter in Montreal for seven seasons when he signed with Yomiuri and would hit over .300 in a part time role for the Kansas City Royals after leaving the Giants in 1991.

Gullickson had double digit win totals in each of the six seasons preceding his arrival in Japan. In fact, Gullickson was so "in his prime" that his best MLB season came after, rather than before, his time in Japan.  Two years after returning to the US he led  the American League with 20 wins while playing in Detroit alongside fellow returnee Cecil Fielder.

Such was the 80s.  Its easy to forget that  for a short moment back in that decade it looked like Japan might actually catch up to the US in terms of economic power (despite its much smaller population) and this was reflected in the fact that NPB teams were actually able to competitively poach MLB players still in the prime of their careers.

The Japanese economy tanked in the early 1990s and NPB stopped doing that, and the trend reversed itself with MLB starting to poach NPB players in their prime.  Today the salary imbalance between the two leagues makes it all but impossible for Japanese teams to do anything like that, so they've reverted to getting American players more closely resembling the above two stereotypes which, tough stereotypes, are pretty accurate.

But this one card from the 1982 Topps set does hark back to an era when NPB was able to get the best two players of a competitive MLB franchise while still in their prime!
Posted by Sean at 6:56 PM