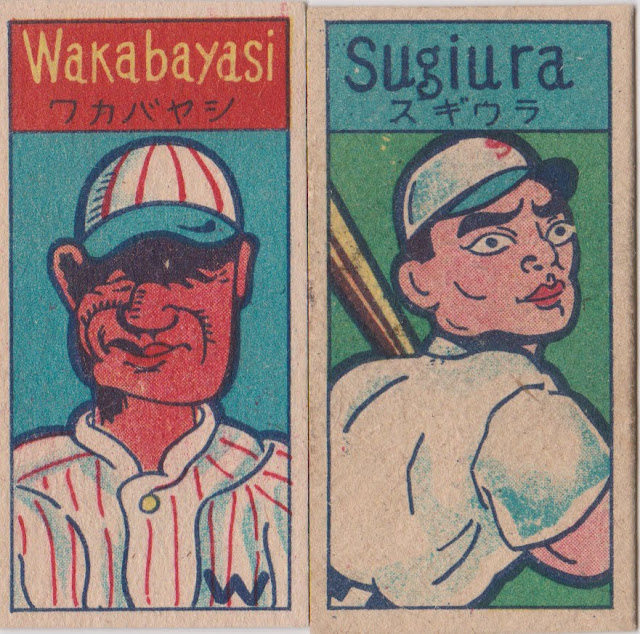 I got these as part of a bigger lot and I was kind of surprised to find out when I tried to look them up in Engel that they are uncatalogued.  They don't seem to be super rare new discoveries since I've seen cards from the set before, so I'm not sure why they aren't in the guide, but anyway I thought I'd share them since they are kind of neat.

I mean, in terms of explaining why they are neat the pictures themselves basically do all the talking.  Menko from the late 40s and early 50s featuring hand drawn images usually either go for extremely simple (bordering on generic) or extremely detailed representations of the players.  This one though goes full on caricature, which gives it a very unique appearance.

The backs of the cards have the player's name and "Baseball tournament" (Yakyuu Taikai) written on the top, along with a number and junken symbols. 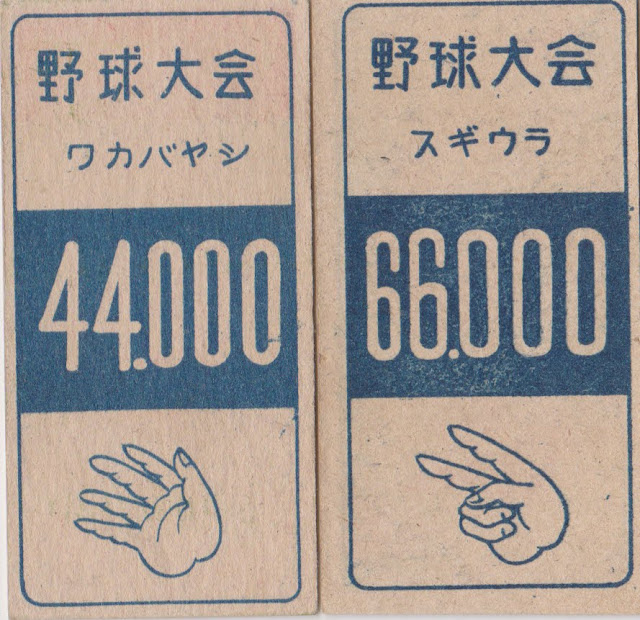 Wakabayashi is one of the more interesting players in Japanese baseball history.  He was actually born and raised in Hawaii to parents who had immigrated from Hiroshima.  As a high school student he was his school's ace pitcher and was chosen to go on an exhibition tour to Japan in 1928.  Hosei University recruited him and he became a dominant pitcher in the Tokyo Big 6 university circuit in the early 1930s.  When the first pro league was formed, he joined the Tigers and became one of the top pitchers in the very earliest days of pro ball in Japan, his career lasting until 1953.  He finished with 237 career wins and a 1.99 career ERA (!) and was later inducted into the Hall of Fame.

Sugiura's resume isn't quite as impressive, his pro career only lasted 8 seasons between 1946 and 1953, though this severely underestimates his overall career since he was already 32 years old in 1946 when he made his debut.  Like Wakabayashi he had been a player in the 1930s Tokyo Big 6 University league, playing for rival Meiji University.  Since he stayed at Meiji University for graduate school his university career was longer than Wakabayashi's and, like many in his generation, his ability to start a pro career was further delayed by the war.  When he finally got his chance though, despite his age, he was able to show his stuff.  He hit over 20 home runs in 3 seasons and was selected to the Best Nine in 1947.  Not Hall of Fame material, but an impressive player nonetheless!