1949 Kagome Kazuto Tsuruoka: a Happy Card with a Sad Story 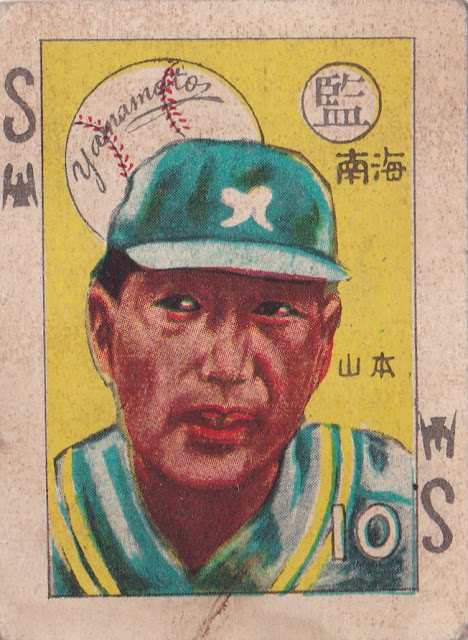 This is a pretty cool card from the 1949 Kagome Color Playing Card Game set which is catalogued as JGA 16.

This card has been around the world at least once. I didn't get it in Japan, but rather got it from Nat over at Net54 who recently put together a full set of cards of Japanese Hall of Famers (at least those who had cards during their careers).  His thread chronicling his collection which I just linked to is really worth a read.  I sent him a few that he needed for that project and he sent me this and a few Expos cards for my collection.

So this card originated in Japan, at some point made its way over to the US where he got it, then made its way back over to Japan and into my hands.  Funny how things like that work out.  If this card were a sentient being, it might have thought it would never see its homeland again when it first left for the US.  Maybe its happy to be back?  I don't know. It kind of looks like a happy card but that might be for unrelated reasons.

The card is interesting since it features the manager of the Nankai Hawks, identified as "Yamamoto".  There is a sad story behind that name. He was born with the name Kazuto Tsuruoka and went by that name throughout his youth.  In World War II he spent five years in the military as a fighter pilot where he saw combat and was assigned to a Kamikaze squadron in August of 1945 just before the war ended (and like Hiroshi Ohshita was saved from almost certain death by Japan's surrender). Throughout that experience, he went by the name Tsuroka.

Then shortly after the war ended he got married, in 1946.  Under Japanese law, when a couple get married they must both adopt the same family name (no use of maiden names permitted) but they are free to choose either the husband or wife's name.  Tsuruoka chose to go by his wife's name, which is rare but not unheard of.  Generally its done when the husband "joins" the wife's family, which for whatever reason (usually economic) is more powerful and wants someone to continue the family name but lack a male heir to do so.

So he went by the name of Yamamoto for 11 years while managing the Hawks (as player/manager through 1953) until in 1957 his still young wife suddenly passed away.  He reverted back to his former name, Tsuruoka, after that and it is the name he is mainly known by.

After his wife passed away, he told a magazine reporter that he wanted to manage the Hawks to a Nippon Series win and dedicate the victory parade along  Midosuji Avenue in Osaka to her.  In 1959, just two years later,  he fulfilled that promise.

He was inducted into the Hall of Fame in 1965, which is a bit odd since he was still managing the Hawks at that time (he retired after the 1968 season).  His playing career was extremely short, mostly due to his missing several years to the War, but in his 8 year career he managed to win an astonishing 3 MVP awards, which is just one shy of winning the MVP in half the seasons he played!
Posted by Sean at 8:03 PM