The Patient Collector: My 1975-76 Calbee Set Proceeds at a Snail's Pace, but it Does Proceed 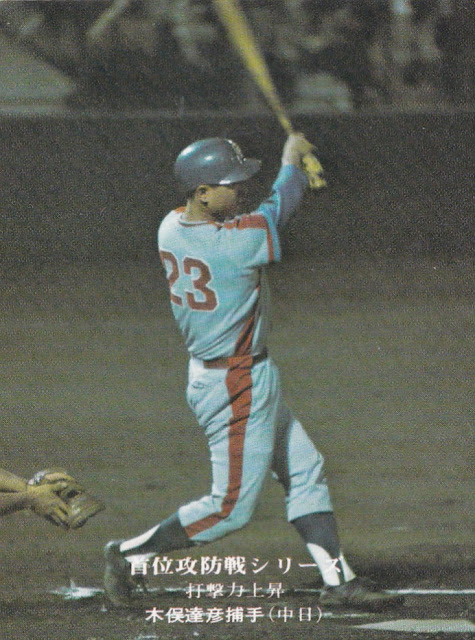 I am still plugging away at the 1975-76 Calbee monster set.  A dealer put four cards from the rare series that was only issued in Nagoya  (which runs from card #37 to #72 in the set) up for auction last week.  I put bids on three of them which I needed but only walked away with one, card #43 featuring Dragons slugger Tatsuhiko Kimata.  Kimata isn't a Hall of Famer but is a pretty decent Hall of Very Gooder, in a 19 year career, all with the Dragons, he made eight all star teams and finished up just 124 hits shy of the 2,000 mark.

The addition of Kimata gives me 22 cards from the Nagoya series, which is more than half of them, so I am making progress.  It was a bit disappointing to lose the auction for the other two though as the cards from this series (and the other two rare Hiroshima only regional issues in the set) are getting harder to find and almost never seem to pop up in auctions anymore.

Its also challenging to be working on a 1472 card set in which every card remaining on my checklist is one I have to devote a lot of time and effort to tracking down. The 1987 Calbee set, which has about 1/3 as many cards and is less scarce took me seven years of solid effort to finish.  I think the most realistic timeline for me to finish this one, barring some miracle, is about 15 more years.  Which is not a timescale most set collectors are willing to contemplate.  But this is Japan, where perseverance is a trait valued above all others.  So onward I go with this! A snail's pace is still a pace.
Posted by Sean at 7:48 PM