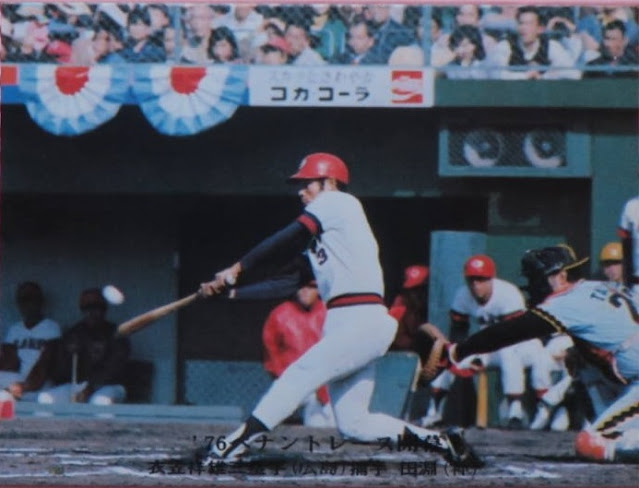 I stepped away from the blog for three months there.  Everything is good!  Its just that my day job is one of those ones where after years of work your employer subjects you to a months long process the outcome of which is that you either end up with a guaranteed job for life on the one hand, or they let you go and your whole career is over in an instant on the other.  No pressure, ha! Anyway, I'm going through that now so I've stepped away from the blog because I'm too busy, but I've found a few spare minutes and thought I'd devote them to a little update post.

Despite being busy, I'm still collecting, albeit at a lower rate than usual.  Here are a couple of updates on stuff with my collection.

Last week I picked up 7 more cards that I needed for my monster 1975-76-77 Calbee set, including the Sachio Kinugasa card (#510) pictured above.  These are the first additions I've made to that set all year and I'm really psyched about finally being able to fill in a few more pockets in those binders.

My progress on the set has slowed to the crawl over the past couple years, something I've moaned about in previous posts.  The problem is that I've basically picked over what all the established dealers have for sale and so now I'm just waiting and pouncing on new listings, which only come up occasionally.  If you look on Yahoo Auctions at any given moment there are usually more than 2,000 listings for cards from this set so you might think it would be easier.  But that is for a set with 1472 cards, and most of those listings are of cards from a few of the easier to find series so there is heavy duplication of some cards and none for most of the others.  Within those 2,000 plus listings there are probably only 500-600 or so different cards available from that set, and the other 900 or so just don't come up for sale that often.

I can also tell that I'm not alone in this situation because I'm always getting into bidding wars on those cards when they pop up, even for common cards in common series which just coincidentally happen to not be in any other dealer's inventory.

My menko collecting has kind of fallen off a cliff recently just because of a recent market trend that  economists refer to as "Holy crap when did everything get this damned expensive???"

Basically the market has exploded here like it has in the US.  I think there was a bit of a lag and vintage cards didn't really start skyrocketing in price until a few months after they had in the US, but its happenned here too.  So while I'm still bidding on stuff that I would have won easily a year or two ago, nowadays I find myself getting blown out of the water and not even coming close to the winning bid on anything.  Especially Sadaharu Oh stuff is just no longer attainable in my price range, so I'm glad I knocked a lot of his cards off my want list when they were (though there are still a lot out there I would like to own!)

Anyway, that is my update. In all honesty I'm probably not going to have enough time to resume blogging at my normal rate until the above mentioned work thing-y is resolved, which won't be until later this year.  I'll try to find a bit of time here and there to post updates though, I find that my collection doesn't really feel complete without it being  blogged about!