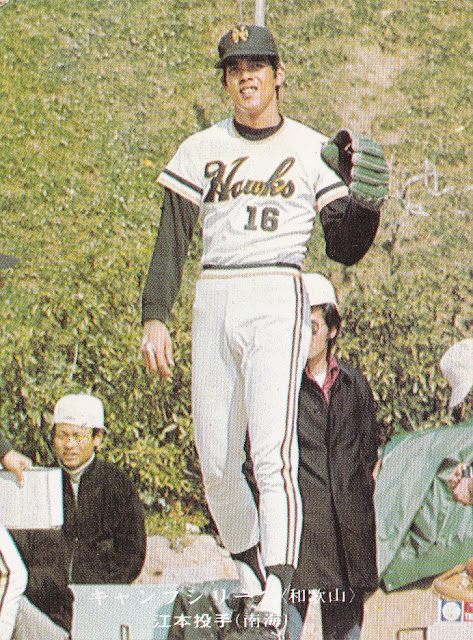 You want my advice?  You need this card in your collection.

This is a 1975 Calbee card of Takenori Emoto, ace pitcher for the Nankai Hawks.

The card isn't so much about Emoto as it is about his hair.  The title on the back of the card says "With adequate resolve, he cuts his long hair!" 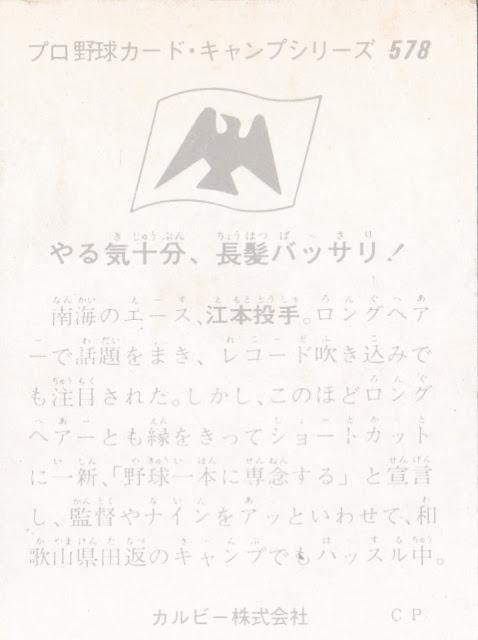 Emoto is a man who likes his hair.  And can you blame him? 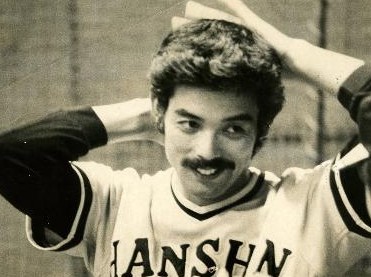 But it almost cost him his career in 1975.  Japanese baseball teams have pretty strict rules on haircuts.  These days a lot of NPB teams have relaxed them, but on high school or college teams its like being in the military: everyone gets a buzz cut.

So back in the 1970s Katsuya Nomura was managing the Hawks and banned long hair.  Emoto wasn't about to let go of his splendid hair and rebelled (nobody else on the team joined him).  I did some looking around and found this archival footage of Emoto giving a press conference to explain the reasons for his rebellion.


The long and the short of it is that Nomura threatened to fine him 500,000 Yen, a massive sum back then, and Emoto backed down and got a hair cut.  The scandal that it caused rocked the nation (well not really but it made the news) and elicited a lot of commentary.  This baseball card is devoted to that incident.

The text on the back says:

"With Adequate Resolve, He Cuts His Long Hair!

Nankai's ace pitcher Emoto.  His long hair became the subject of much discussion and attention even as he was breaking records.  He announced that he would cut this long hair into a new short cut and devote himself completely to baseball, making his manager and team mates say "Ah".  He hussles in the middle of training camp in Tanabe, Wakayama Prefecture."

Inspiring stuff.  I guess. The record it (probably) refers to is perhaps a backhanded compliment, he set the NPB record for balks in 1973.

I like the fact that this card once again demonstrates how ahead of their time these Calbee sets from the 1970s were.  Remember in 1991 when George Steinbrenner and Don Mattingly got into that big public argument over Mattingly's hair? 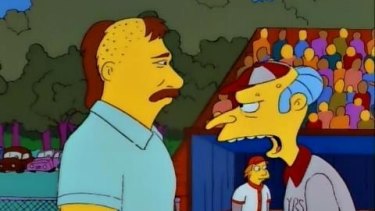 And then do you remember how Topps, Donruss, Fleer and Upper Deck all made cards about that in their 1992 sets?

Also I like this card because there is a guy on it who seems to be totally checking out Emoto's butt, which is also  not something you often see on a baseball card: 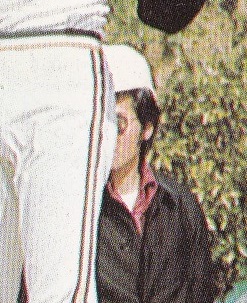 Also, if you look at the card photo you have to wonder what is Emoto doing exactly?  He seems to be levitating, with a crowd of people surrounding him.  He is in a baseball pose, but he is standing in front of a hill and I don't think he is on a pitching mound since it is too high relative to the guy looking at his butt.

Anyway, this card has a lot going on in it, all of it fascinating.  Even though Emoto's hair didn't cost him his career, his mouth eventually did.  In 1981 after getting yanked early from a game he publicly suggested that his manager was stupid.  The blowback he received from that (Rule #1 in Japan: Never insult your boss.  Rule #2: no matter how awful something tastes, always say its Oishii even as you are gagging on it) caused his forced retirement shortly thereafter.