Confusing the Kids: What Color Uniform do the Giants Wear Anyway? 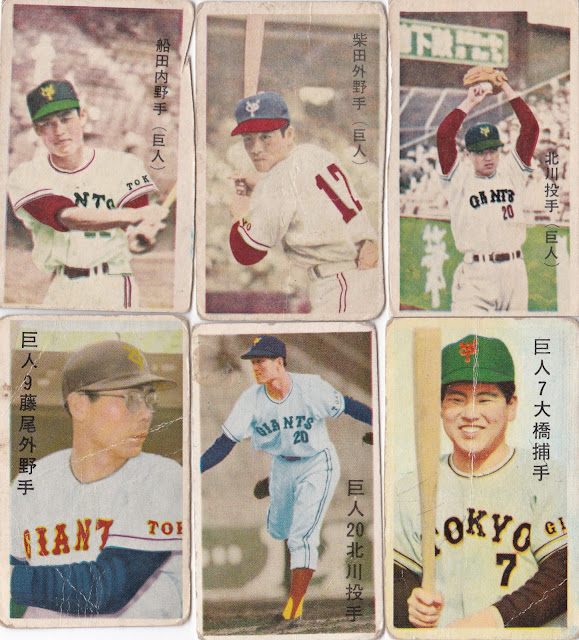 One of the cool things about Japanese baseball menko cards from the late 50s to early 60s is that most of them featured black and white photographs that had been colorized.  I like this because whoever was doing the colorizing in most cases either didn't know what color the player uniforms of a given team were supposed to be, or they knew and just decided to make up their own anyway.

I have a stack of about 40 menko from that period sitting next to me right now and I just pulled out all of the cards featuring Yomiuri Giants players, which are in the scan above.  They all come from either Marusho or Marukami sets from the early 1960s.  The Giants uniform colors were (and are) black and orange. But you wouldn't know that from these cards.

Just look at the headwear.  Everybody has different color schemes.   Basically a kid with these cards who had never been to a Giants game could imagine them having hats with:

And the color scheme on the rest of the uniform is equally confused.  Its important to note that some of these cards come from the exact same set (all three cards on the top row are from the Marukami JCM 14 sets).

This holds true not just for Giants players, but also for those of other teams.

This gives these sets a lot more "oomph" than they otherwise would - the actual Giants color scheme is fairly drab and boring.  A lot of these ones look way better - green hats with orange letters?  Love it!  Everybody wearing maroon long sleeved shirts under their jerseys?  Great!
Posted by Sean at 7:31 PM