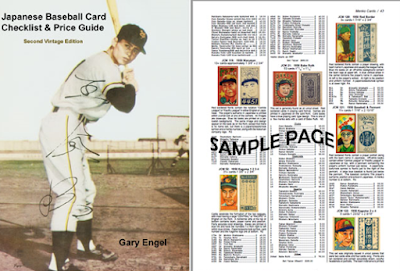 After years of collecting vintage Japanese cards using mainly Japanese language resources as a guide, I finally splurged on a copy of the definitive English guide book to them: Gary Engel's Japanese Baseball Card Checklist and Price Guide.  Part of the reason I had been taking my time was that I had heard a new edition was in the works, and it was finally released in 2018, 6 years after the previous one. I thought I would devote this post to giving the book a proper review since I don't get many chances to write those on a blog about Japanese baseball cards (its basically the only book).

I bought the guide last Friday and my overall impression after spending a weekend with it and giving it a thorough reading over is extremely positive.  I definitely recommend buying it to anyone who collects or has an interest in vintage Japanese baseball cards (its available on Prestige Collectibles website, I bought the emailed PDF version and received it within minutes of making payment. It is well worth the $25 asking price).

The book, which is the "vintage" edition, covers the time period from the earliest cards in the 1930s until 1990.  The justification for cutting it off there seems to lie in 1991 being the year that BBM issued its first set, which caused a radical change in the hobby from that year on.  This is a reasonable way of drawing a line between vintage and modern in Japan, though from a Calbee collector's perspective (admittedly that is a highly niche perspective) I note in passing that it feels a bit arbitrary since Calbee sets, at least in terms of rarity, didn't really enter the high production/high retention years until much later in the 1990s, and early 90s Calbee sets are about as hard to find as the ones in the late 80s.

Unlike most American card guides, this one is not organized chronologically year by year, but rather by card type (though within each type it is done year by year).  It has separate sections for Menkos, Bromides, food/candy/gum cards, Karuta, vintage game cards, Takara and Calbee.  Given the radical differences in the cards across these sets, organizing it like this makes much more sense than trying to do everything year by year, so I think that was a good choice.

I was extremely impressed by the depth of the catalogue, particularly with the earlier Menko and Bromide sets the author clearly spent a great deal of time in tracking down and listing some very hard to find cards which (to my knowledge) have never been catalogued elsewhere, even in Japanese.  Going through hundreds of sets, most of them un-numbered and many even lacking the player's name on them, and creating a well systematized catalogue of them must have been a gargantuan task.  As the author notes it is not comprehensive and there remain quite a number of Menko and other early sets that have yet to be listed (this set of mine here, for example, isn't listed), but what they have here is extremely impressive and covers the majority of what must be out there.

The PDF version that I have comes with color illustrations of cards from each set, which is quite handy given the fact that the color is often necessary to identify certain sets, making black and white images kind of limited in usefulness.

An interesting feature of the guide is that it lists pre 1973 sets with a "Scarcity Factor" ranging from R5 (less than 5 copies known to exist) to NS (not scarce, more than 1,000 copies), something I haven't seen in other baseball card guidebooks before.

The Calbee sets from 1973 to 1990 are well catalogued here, so it is a great resource even if you are just interested in Calbee cards.  Of particular note is that the author even catalogues the 1978 and 1979 issues, which was a difficult task since they were issued in multiple different series with different designs, many of them un-numbered (Sports Card Magazine in Japan doesn't bother to list the Calbees from those years, probably for that reason).

There are a couple of suggestions I have with regard to their Calbee sections for any future editions.  One is that the write ups introducing each set don't make any mention of the existence of short printed or regional series within the set.  For example the 1975-76(-77) Calbee set has three series in it which were only released in either Hiroshima or Nagoya and are much harder to find than the rest of the set.  The prices for these cards as listed in the guide accurately reflect this scarcity, but there is no mention of it in the write up, which would probably be confusing for the average reader who would wonder why these cards (mostly featuring common players) are so expensive.  Its also kind of an interesting detail to explain regardless of the price difference.

Another issue I noticed is with the pricing, which is actually quite a bit harder to fix.  As the author notes, it is quite difficult to price a lot of these cards due to the thin nature of the market - its just not as deep as the American one and therefore there are a lot fewer transactions to base prices on, especially with older cards where there might only be a handful known to exist.  The prices are described as taking into account both the American and Japanese markets and are based on the higher of the two when they don't agree, though they add appropriate caveats about the uncertainty of prices.

With the Calbee cards I think there is a more established collector's market in Japan which makes that a bit less of a concern.  The prices for most Calbee cards in the guide seem about right and roughly square with what they are listed for in SCM, though Sadaharu Oh cards and those of some American players are listed for quite a bit higher than what they go for in Japan, presumably reflecting the price they realize in the US where they are more popular.

Going the opposite way, however, the guide severely undervalues a number of vintage Calbee cards that are being hunted down by Japanese collectors (but mostly ignored by American ones).  For example, the guide values card #125 from the 1973 Calbee set (featuring Motoi Mitsuo and Higashida Masayoshi) for $250 in Near Mint condition, but the same card in mid-grade condition sold at auction for about $3,000 here back in February.  Likewise card 288 from the same set featuring Sachio Kinugasa sold just last week for about $1400, but the guide lists it at just $150.

The point here isn't to nitpic outlier sales data, but rather to point out that some prices in the guide are missing pieces of information that drive market prices in Japan, but not in the US.  Those two cards are among the hardest to find for anyone working on a 1973 Calbee set and thus they sell for insanely high prices whenever they show up at auction here because there are several set builders out there looking for them (to my knowledge, there aren't many vintage Calbee set builders in the US, certainly not enough to have an effect on card prices there like they do here).  The Japanese Calbee card market has become a lot more aware in recent years of the relative scarcity of certain vintage Calbee cards which are harder for set builders to lay their hands on and market prices have started to really go up for those (as a Calbee set builder, I'm acutely aware of stuff like this).  This also applies to more modestly priced cards from later years, like the short printed block in the 1987 Calbee set (#75-100) which sell at a premium in Japan but are listed at the same price as cards from other series in the guide, and a few others (cards from the 250s in the 1988 Calbee set for example which have recently been selling for much more here).

So my advice in terms of price might be to try to do a bit more in depth research on Japanese market trends, since they don't seem to be reflected in the values as listed (again, this applies to a very small number of the cards listed in the guide and isn't a major problem, but if a collector had that Mitsuo/Masayoshi card for example they would be WAY better off selling it in Japan via Yahoo Auctions where Japanese collectors would bid it into the stratosphere than they would listing it on Ebay where American buyers would pay way less for it, so its worth trying to catch stuff like this even if the guide is mainly marketed towards American readers).

These minor issues aside, this is really a great book and I am completely satisfied with it as a valuable reference piece.  If you collect Japanese cards (pre 1991), then this is a must have book.