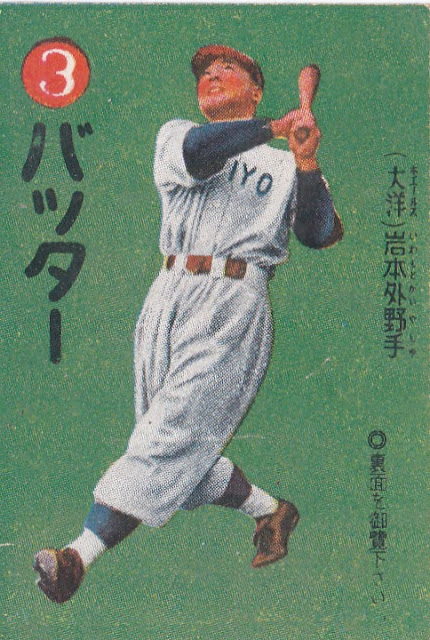 In addition to Menko I've been getting interested in some of the caramel baseball cards that were released in Japan, mostly in the late 1940s and early 1950s.  This is a card of Hall of Famer Yoshiyuki Iwamoto from the 1952 Kawakami Caramel set (JF 38 in Engel).

Iwamoto was one of the Japanese game's earliest power hitting stars, though like most of his generation the war robbed him of several years during his prime - after he left for the war following the 1942 season he didn't return until 1949, a 7 year gap.  On his return though he did accomplish two things for the record books. When baseball was reorganized into the modern NPB for the 1950 season, on opening day he hit the first home run (a grand slam) in Central League history.  He also became the first player to hit four home runs in a single game that season. 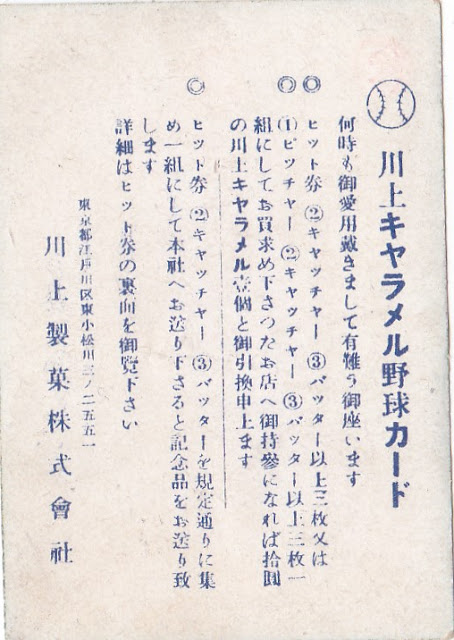 These caramel cards are super rare, this set is rated as R4 in Engel (fewer than 10 copies of each card known to exist) and most of the dozens of sets issued by caramel makers during that time period are about the same.  Another copy of this Iwamoto card sold at Prestige Collectibles in 2011.  When you have the cards in hand its not hard to understand why there are so few of them.  They are small (a bit smaller than 1950 Bowmans for comparison) and printed on extremely thin cardboard (it would be more accurate to describe it as thick paper really).

Another reason they are so scarce can be seen on the back.  The front of each card from this set has either a 1, 2 or 3 in a round circle with "Catcher", "Batter" or "Pitcher" written in Japanese katakana on it (my Iwamoto is a "3 Batter" card).  The back says that if you collect all of these and send them in to the company, they will send you a commemorative present of some sort.  So probably a lot of these were redeemed back in the day and disposed of by the company rather than saved.

In relation to that I should note that there might be an error in the Engel catalogue on this.  It says that there are 3 cards in the set and they come with either a "2 Catcher" or "3 Batter" designation on the front.  But the text on the back of the cards also clearly refers to a "1 Pitcher" type of card which Engel doesn't mention.  It also refers to a "Hit Ticket" card which doesn't have a number.  So there might be more cards from this set out there which exist, unless I am missing something.

I think this is a pretty good looking set.  Kawakami wasn't one of the major makers of caramel cards (Kobai made the most) but it did a good job with these!