An Album Full of 70s Goodies

One unique thing about collecting Calbee cards is that sometimes they show up in Calbee albums.

In most (perhaps all?  Not sure) of the 46 years since Calbee started selling cards, they've also produced albums which were usually given away as mail-in redemptions.  So in addition to all the vintage cards floating around there are also a lot of old albums.  I don't collect the albums themselves, but sometimes a non-card dealer, usually antique dealers, will come across old collections stored in them and put them up for sale.  These are so awesome when you can find them.

And recently I did find one.  Or more accurately I found ten of them up for sale individually by the same seller.  Each album was from the 1970s and was stuffed full with 1970s Calbee cards from various years.  You can cram 72 cards into one of these albums if you put two cards per pocket, which is what these contained.

My recent post lamenting the fact that auctions almost always end exactly as I am in the middle of putting my kids to sleep was partly inspired by these.  I put bids in on all ten of them.  I didn't expect to win all ten (in fact, couldn't afford to really) but was hoping to win three or four.  But while I was happily telling them the story of an epic battle between Pokémon and dinosaurs (I let them decide the topic of each night's story), the auctions ended and I was outbid on all but one of them.  When I looked at the final prices the ones I got outbid on went for I kicked myself since I definitely would have bid higher on a few of them had I been there to do so.

But I was also happy that I did win one!  And it was a great one.  The albums were sorted by team and mine contained cards of Hiroshima Carp and Hanshin Tigers players from Calbee sets issued between 1973 and 1979.  I paid around 7000 Yen total with shipping, so the cards cost  me about 100 Yen each, which is a good deal, especially for what I got.

Look at those beauties!

There were quite a few cards from the 1975-76-77 Calbee set that I am working on, but most of them turned out to be doubles unfortunately (though expected).  The real highlights for me were the cards from the 1973 and 1974 sets, which I have way fewer of. 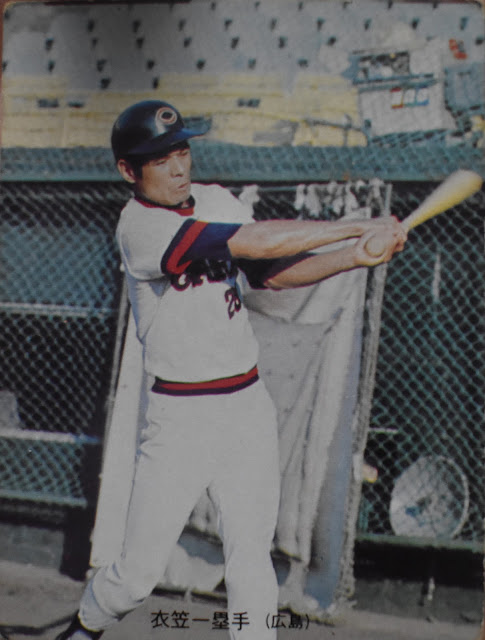 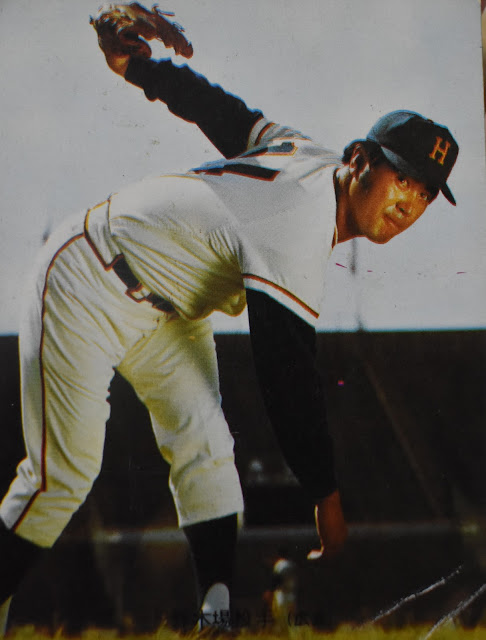 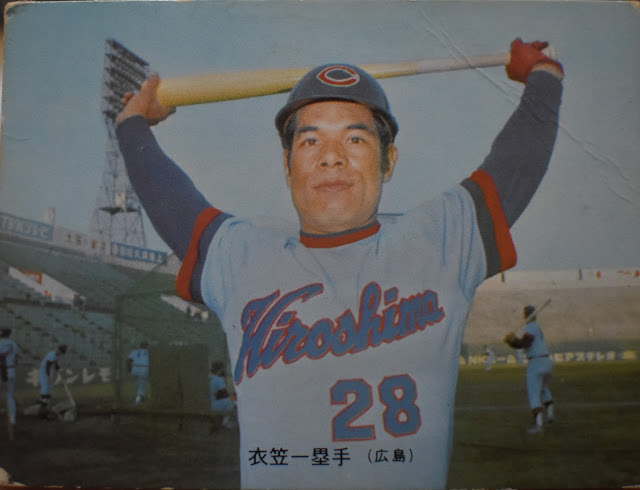 Some cool action shots too: 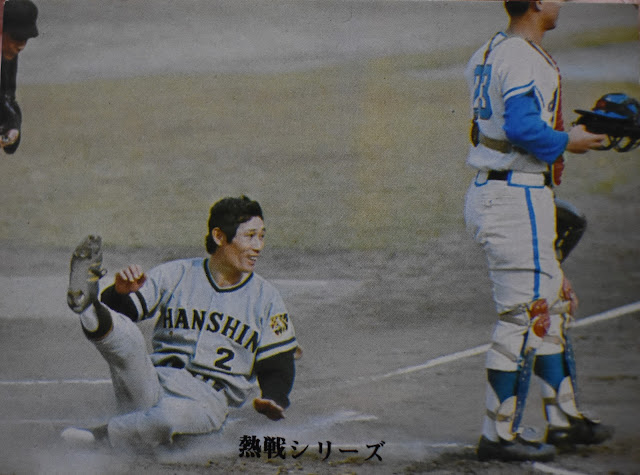 This card here though was the highlight.  Yutaka Enatsu (See Dave's great write up about his cards here and a great write up of his career here on Eye of the Tiger) is one of the most interesting players in modern Japanese history.  He holds the record for most strikeouts in a season (401!) and had a resume that should have made him a no-brainer as a hall of famer.  But he was involved in one of the most famous gambling scandals in Japanese history (the black mist scandal, kind of Japan's version of the Black Sox) early in his career, and then arrested for drug use after he retired, so he's been left on the outside looking in.

I have a few cards of him, but this one is now my favorite.  Its from the 1973 Calbee set and its one of those great 1970s Calbee cards that shows you a wonderful glimpse of stands full of spectators and colorful advertising billboards. 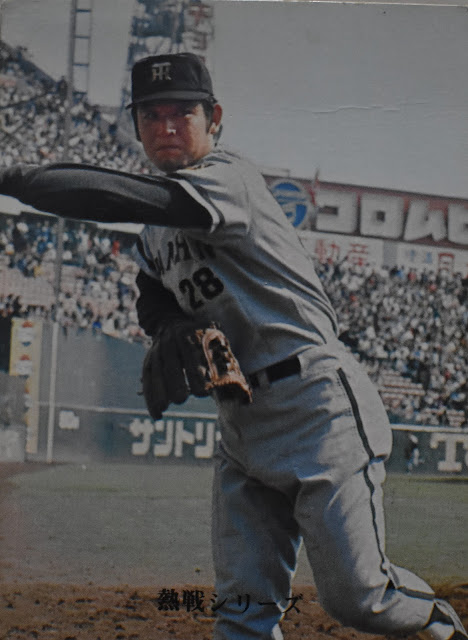 I was surprised to find it in there because this is one of his most expensive cards.  SCM lists it at 20,000 Yen and it rarely shows up on Yahoo Auctions.  Its a bit lower grade (there is a crease to the right of his head) but this card alone made the purchase price worthwhile.

There were a lot of other beauties in there which were fun to flip through. 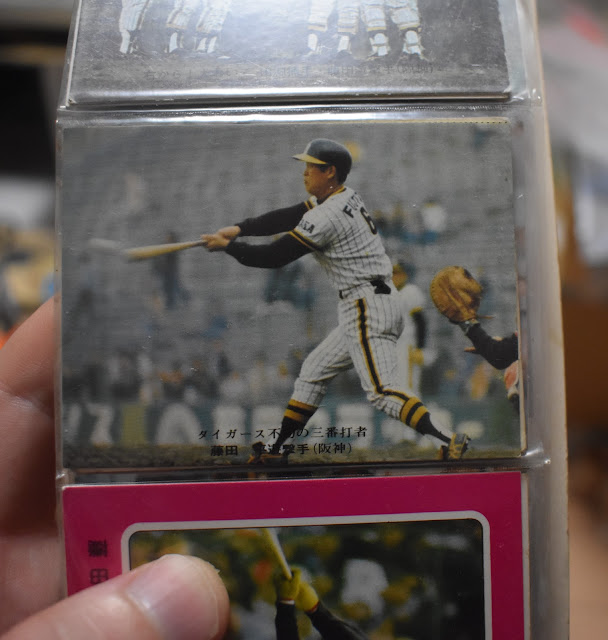 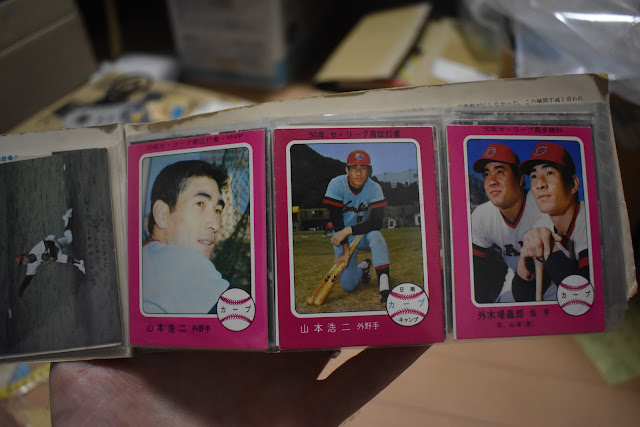 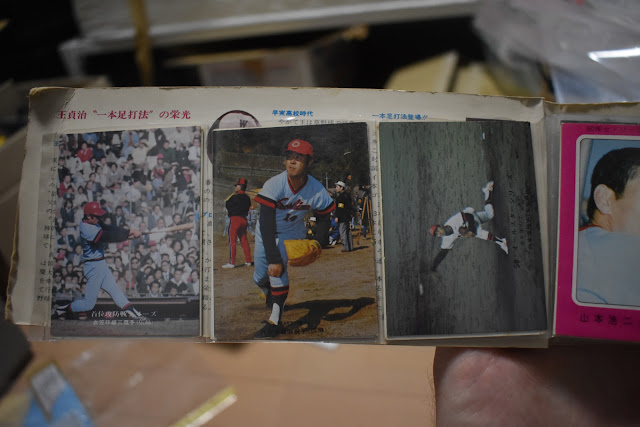 I'm not sure if these cards were actually put in this album a long time ago by their original owner, which would be neat, or if the seller just shoved them in there for the purposes of selling them.  Either way, except for the smattering of 75-76-77 Calbee singles I needed for my set, I've decided to keep these as they are in the album.  Its kind of neat to flip through them the way they were intended to be back in the day.
Posted by Sean at 7:14 PM