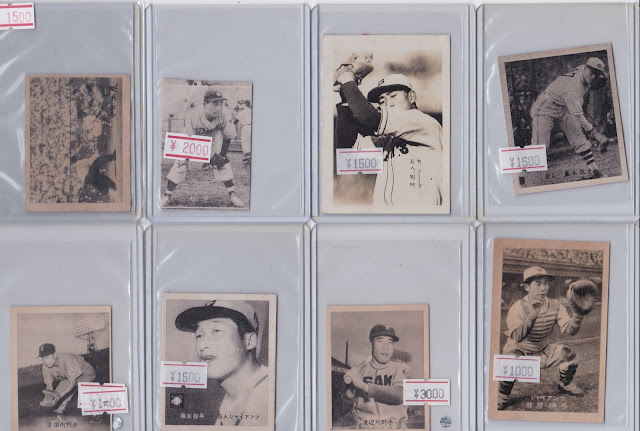 Last year one of the baseball card stores in Nagoya, Caps, went out of business.  Unfortunately I had never actually visited the shop (it was a bit out of the way for me to get there) but I wish I had since it was the only one in town (except Mandarake) which had vintage stuff.  Zippy Zappy at Torren' Up Cards I think knew the shop way better than I did and his post about a couple Shigeru Sugishita Bromides he recently got reminded me of some cards that I have which originally came from Caps.

After Caps closed the owner liquidated most of his stock on Yahoo Auctions and I ended up picking some of it up.  The best thing I got was a big stack of old bromides from the late 40s/early 50s featuring a lot of Japanese Hall of Famers, mostly players from the Giants, Dragons and Tigers.

I could tell he had just shoveled up what was in his showcase and put it all in one lot.  The cards were all still in top loaders and still had price tags on them. 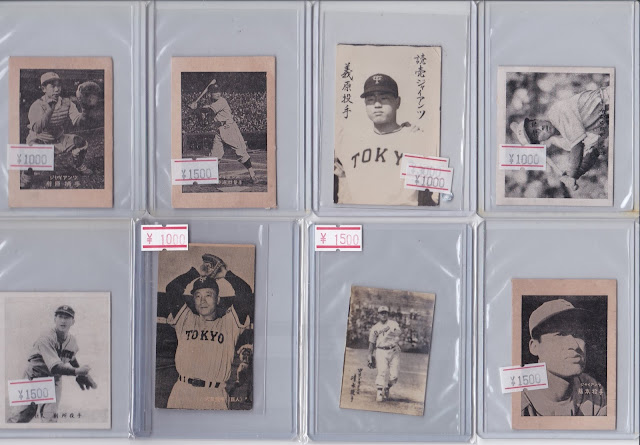 This gave them a real poignant look when I received them and laid them out.  I know from personal experience how gut wrenching it is to run a card shop - every collector's dream business - and then lose it.  We closed down ours 27 years ago and for decades after (as recently as 2015) I was still finding cards in top loaders with price tags on them like these in boxes at my parent's place, serving as a visual reminder of both the happy days of old and also the sadness that they are gone. 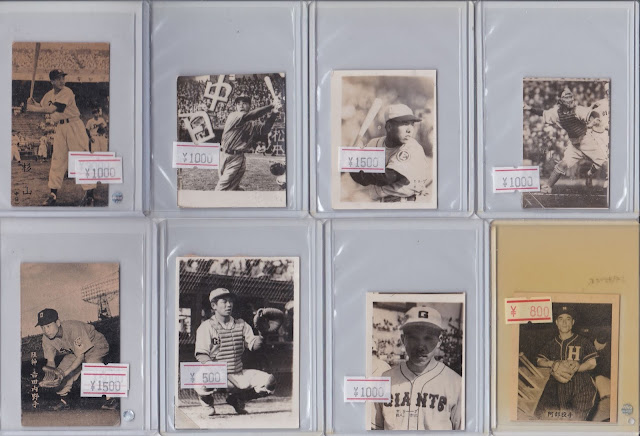 So I bought these cards over a year ago and I haven't been able to bring myself to take them out of their top loaders with the price tags still on them.  I don't usually store cards in top loaders and I have a binder for my vintage bromides where these should go.  But no, I can't do it.  These cards in these holders are one of the few physical reminders that a shop called Caps which was run by a guy who I never met but who probably really loved baseball cards and having a baseball card shop existed.  So I'm keeping them in there.  They actually look kind of nice this way.  Like if I ever want to play a make believe game of "card shop owner" all I have to do is break these out and voila - pretend card shop!
Posted by Sean at 6:35 PM