If you've been following certain baseball card forums like Net54 recently, you'll be familiar with the current round of PSA related scandals.   Some of these revolve around sloppiness, like grading reprints as the real deal, while others involve inadvertently  grading high value trimmed cards as though they were unaltered.  The latter in particular is a serious problem as the apparent flaws in PSA's grading process that let trimmed cards skate through created the perfect environment for a cottage industry of fraudsters to spring up. The result is that lots of people have spent money on trimmed cards, particularly through PWCC auctions, which are only worth a fraction of what they paid for them.

This has obviously strained the trustworthiness of the PSA brand with some collectors.  And from a Japanese perspective these scandals probably couldn't come at a worse time since just last November they opened an office in Tokyo and started to offer their services in Japanese.  This expansion makes sense from PSA's perspective as Japan is probably the world's #2 market for sports cards and, as I've talked about before, PSA and other graders until now have had almost no presence in this country, where the hobby is significantly less obsessed with minor differences in condition compared to the US. So the Japanese market represented a pretty sizeable piece of unpicked fruit for PSA and its not surprising they've come ashore here to try to convince the Japanese collecting world of the value of a PSA holder.

The scandals themselves are probably not going to dent PSA's expansion into Japan since almost nobody here  follows Net54 or other US forums.  But they do bring up something which might be way more problematic for PSA, which is that the quality control issues which the current scandals have raised in the US also apply to their grading of Japanese cards.  And one of these might be too big for the Japanese hobby to ignore.

The problem is that even though PSA only recently opened an office here in Japan, they've been grading Japanese cards for years.  And while I'm sure they made the best use of the expertise on Japanese cards available in the US while they did so, that expertise wasn't always deep enough to get stuff right.  And the mistakes they made are in some ways more embarrassing than the ones that have landed them in hot water among American collectors recently.

A prominent example of this is the 1929 Shonen Kurabu Babe Ruth.  This is a well known card among Babe Ruth collectors since its actually one of the more affordable cards issued during his playing days out there.  Its probably more famous outside of Japan than it is in.

PSA used to grade that card as a "1928 Shonen Kulubu."  They got just about everything about that card wrong. I did a post about it 3 years ago and made a list of the things PSA screwed up on it:

"Year: PSA says 1928, actual year is 1929; Name: PSA says Shonen Kulubu, actual is either Shonen Club or Shonen Kurabu; Set: PSA says it was a "multi-sport premium", actual set was not sport specific and contained a variety of other subjects. Photo: PSA says without qualification that it is Babe Ruth hitting his first home run of the 1926 season, Old Cardboard notes that while this is what it is commonly described as it has not been confirmed.  Not sure which is correct but given how error-riddled the PSA entry is and how accurate everything else in the Old Cardboard one is I give greater weight to the latter until evidence confirming it surfaces. Organization: PSA seems to imply that this was the magazine of an organization called "Youth Club".  "Youth Club" is an accurate English translation of "Shonen Kurabu", but as far as I can tell that is just the title of a magazine and not necessarily the name of an actual club."

While they now get the information correct, there are still copies of this card floating around in older PSA holders with all of these basic mistakes - wrong year, wrong name of set - right on the holder like this:

That mis-step could probably be overlooked though, since that card is very much on the perhiphery of the Japanese collecting world's radar.  Also, as I mentioned in my earlier post on it, even here many collectors aren't certain about the details like the year it was printed  (though the incorrect name is immediately recognizable).

The much more serious miscue for PSA is that they stepped on a huge landmine with the 1994 Calbee Ichiros.  In 1994 Calbee issued their first ever cards of Ichiro - three of them in (#37 to 39) in a rare set only distributed in the Hokkaido, Kyushu and Sanyo regions.  While all the cards from that set are hard to come by, the Ichiros are even harder, they seem to have been added to the set late in its print run and are short printed cards in a set that was rare to begin with. There probably aren't more than a few dozen, maybe a hundred,  of each of them out there.

These three cards are among the most famous and sought after in the Japanese hobby.  Technically they aren't his rookie card (BBM issued a card of him the previous year) but they are his earliest and rarest Calbee cards of (arguably) the most famous player in Japanese history.  Its hard to come up with an analogous card from the US hobby that would evoke the same recognition, but imagine a cross between a 1989 Upper Deck Ken Griffey Jr (recognizable iconic card of superstar from same generation) and a 1952 Topps Mickey Mantle (most coveted and valuable "modern" card).  Now imagine if only a hundred copies of that card existed.  That is roughly where the 1994 Ichiros exist in the Japanese hobby:  cards that are instantly recognizable to all serious collectors. 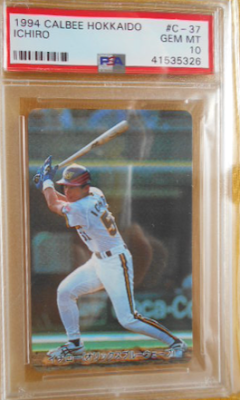 Unfortunately for PSA, back in the 1990s a forger flooded the market with fake 1994 Ichiros.  The fakes are really convincing, I even got suckered on one myself a while back.  And so did PSA.  There are a huge number of fake 1994 Ichiro Calbees in PSA holders out there available for sale.  As with the Ruth, PSA has learned from that mistake.  They no longer slab fake Ichiros, so one in a recent holder is likely the real deal.  But the damage is already done.  Go on Yahoo Auctions, the Japanese equivalent of Ebay, and you'll find several copies of these cards in PSA 9 or 10 slabs.  All fake (identifiable from the coloration on the backs, see this guide here) .  This is a fake in a PSA 10 slab available right now. 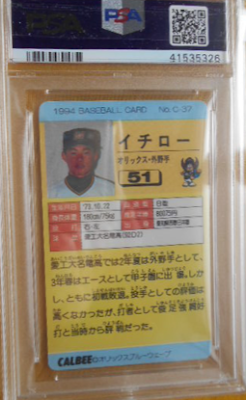 This is a huge issue for PSA since the existence of these slabbed fake Ichiros is hard to ignore.  It'd be like if in their early days in the US they had slabbed a bunch of fake 1952 Topps Mickey Mantles which were still floating around on Ebay, easily identifiable as fakes by anyone who knew what to look for.  How would any serious collector trust a grader that could make such a basic mistake on such a key card?  This is super serious in an industry like grading, where consumer trust in the brand is absolutely paramount.

I should note that these two examples are not alone, PSA has improved a lot in their knowledge of Japanese cards in recent years but there are other examples of older PSA slabs containing incorrect information on Japanese cards (though I should also note that as far as I know the Ichiros are the only examples of outright fakes finding their way into PSA holders).

I'm not sure if this is necessarily fatal to PSA's success in Japan, but it means that they are going to be swimming upstream against a legacy of grading Japanese cards based on less than perfect information which might significantly complicate their efforts to gain acceptance here.