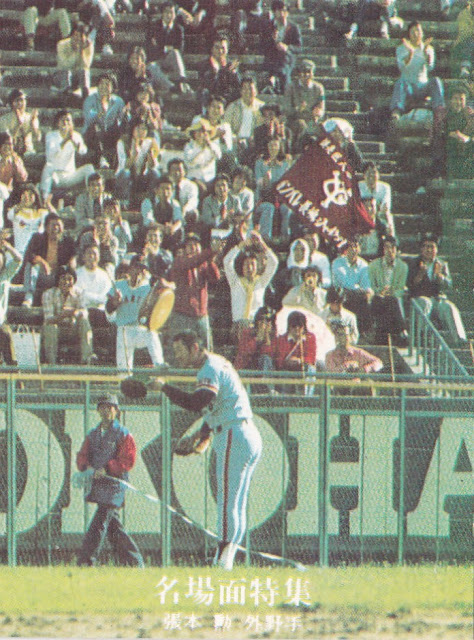 1977 Calbee is very confusing.  They put out about a dozen sets that year, many of them rare regional issues that are too expensive for me to even contemplate going after.  The only ones I'm actively collecting are the series at the end of the 1975-76-77 Calbee set which just happen to have been issued in 1977  but are really part of that monster (as opposed to the other sets which were released solely within the 1977 calender year).

I did, however, accidentally get a decent start on one of the 1977 Calbee sets, the "Grey Border Star Back" set of 216 cards of which the above, featuring Isao Harimoto, is an example.

When I first started work on the 1975-76-77 Monster, I just knew that the backs of the cards had a star patterned border, like this: 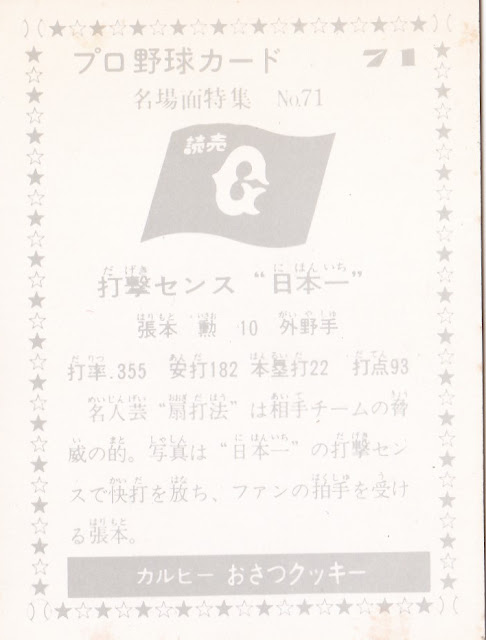 So my early collecting strategy was to just buy up as many cards like that as I could find. When I finally accumulated enough to start organizing them in a binder and getting serious about completing the thing, I realized that for some of the low numbered cards I had (up to 144) there were two cards with the same number.

It took me a while but I eventually learned that the extra cards were actually from the 1977 Grey Border Star Back set which is visually almost identical to most of the 1975-76-77 Calbee card backs.

To add to the confusion, about half of the 1977 Calbee Grey Border Star Back set cards do not have grey border star backs.  From 144 to 216, the borders have more of a vine like border that looks like this: 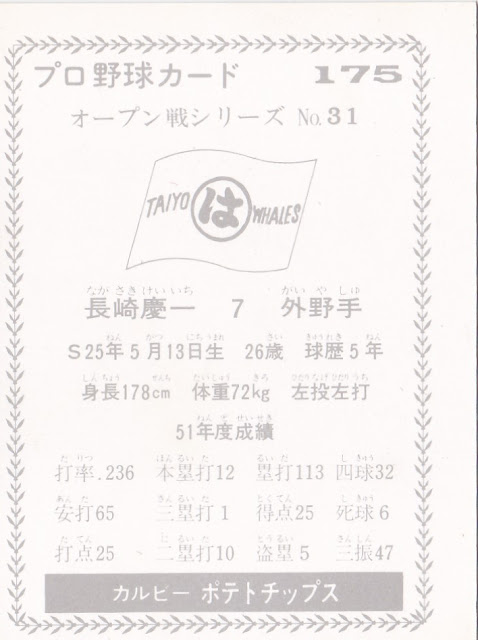 OK, as I am writing this I realize it is making no sense because no matter what explaining these sets in an easy to follow manner is just impossible.

TLDR version: I accidentally collected cards from the wrong set because they looked the same as cards from a set I was collecting.

I'm actually thinking though that maybe this one 1977 Calbee set might be another project for me to work on.  I already have about 40 cards from it so I have a bit of a start.  And unlike the super rare regional issued sets from that year (where single cards go for hundreds of dollars each) they aren't too scarce (at least by 1970s Calbee standards) and you can sometimes find them for a couple hundred Yen each.

There is also a certain sunk cost that I'm looking to put to use here.  While these sets are extraordinarily confusing at first, once you've spent some time learning about them it actually is possible to gain a full understanding of what they contain and how they are different from each other.  With this set in particular I have already made that investment when I had to disentangle them from my 1975-76-77 set, so my brain has been trained to identify them on sight. And they are pretty cool cards, like any Calbees from that era.  So why not?  1977 Calbee, here I come.
Posted by Sean at 5:53 PM