I got the remaining 5 figures I needed to complete my 2012 Georgia Coffee Pro Baseball Foreigner Helpers set!  Ralph Bryant, Orestes Destrade, Randy Bass, Bobby Rose and Alonzo Powell arrived in the mail from a Yahoo Auction seller to finish them up. 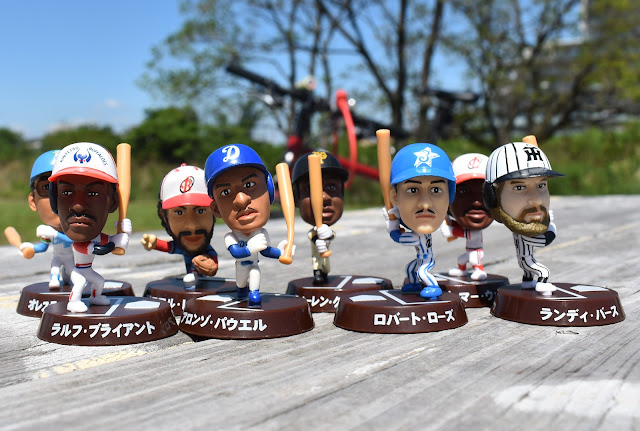 I really do like these guys.  They just cheer me up in a way that I need in the middle of a pandemic.

The player selection is pretty good, all these guys were all stars. Everyone played during the 1980s or 1990s.  Randy Bass and Boomer Wells with their 1983 debuts are the earliest, while Bobby Rose, who played his last season in 2000, is the latest.  Rose was the only guy still playing when I arrived in Japan in 1999 and thus is the only one I remember as an active player here.

Given that these came out in 2012, I'm curious why they didn't have any stars from the 00s in the set.  Tuffy Rhodes would look pretty cool on one of these.

I got two of the booklets (for Bobby Rose and Orestes Destrade) that came with the figures.  They are pretty cool, featuring a picture of the figure, a player bio and an ad for a Georgia brand battery charger on the front.

And the back has a checklist of the whole set, along with an illustrated diagram showing how to assemble the figure for those who may have difficulty with whole the "round peg goes in round hole" thing.

This means I still "need" the booklets for the other 6 in order to have the things really complete, but I'm pretty satisfied to go without.  The figures themselves are enough for me.