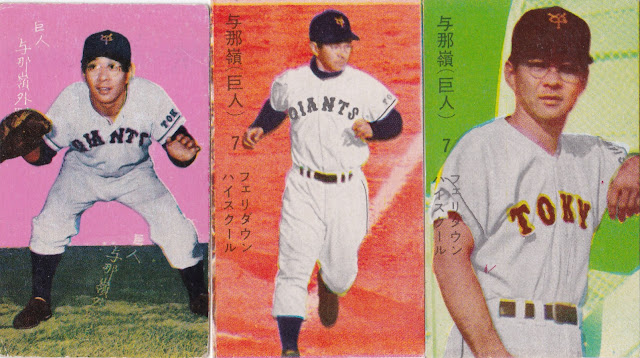 I am not a player collector, but if I was I think I would be a Wally Yonamine collector. 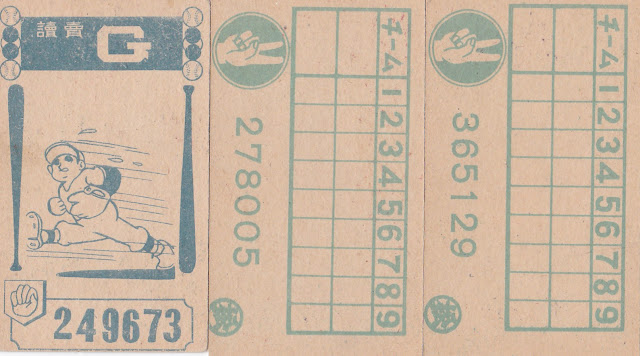 Perhaps less than his playing accomplishments I like the fact that he was a nice guy.  Sadaharu Oh recalled a story about when he was a kid going to Korakuen Stadium and being in a crowd of kids trying to get autographs of Giants players.  The other kids had placards and regular baseballs, but Oh was a poor kid and all he had was a rubber ball, which the players ignored.  Yonamine noticed this, came over and signed Oh's ball.  Years later when Oh was a rookie team mate of Yonamine he mentioned this to him and Yonamine said he remembered.  He couldn't figure out why all the Japanese players weren't signing.  Because nobody else would, he gave the big eyed kid, who he of course didn't know was Oh at that point, an autograph.

These cards, from the 1958 Marukami set (JCM 31b) and the 1958 Marumatsu set (JCM 32a) which feature him as a Giant.  He also played for and later managed the Dragons here in Nagoya, which gives me another level of interest in him.

I'm not sure how many cards are out there of him, being a star for the Giants he appears on a lot of the tobacco card style sets from the late 50s and early 60s.  But he doesn't appear in as many of the more colorful menko sets from the early 50s, which is a shame because those are awesome.

When I see his name in a Yahoo Auction search for old cards, I usually buy them.  This has become a bit more difficult recently though.  Yonamine is not a common name in Japan. In fact its not a name used in the Japanese main islands, Yonamine's father was Okinawan and the name uses kanji characters that are more commonly used there (my mother in law is from Okinawa so I know this from that half of the family).