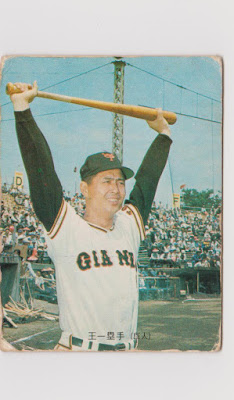 I certainly have been posting a lot this month, for some reason I have re-caught the collector`s bug and have been adding a lot of new cards to my vintage Calbee collection.

The above card is one of them, which just arrived in the mail yesterday (its a Yahoo Auction purchase).  It is card #10 from the inaugural 1973 Calbee set and features Sadaharu Oh.

I like this card a lot, that picture is just really cool.   Recently NPB Guy picked up the iconic #1 card from this set featuring Shigeo Nagashima   and I think this can be considered a pretty good companion to that one (which I don`t yet have) - since it is sort of the first Calbee card of the other member of the ON combo.

The picture was taken on a different day from the Nagashima picture, since Oh is wearing a home uniform in his while Nagashima has an away uniform on in his, but both appear to have been taken at a spring training facility.

What I mainly love about the card is all the clutter in the background. The big pile of bats scattered around in the lower left of the card are a nice touch.  And its really interesting to see just how primitive NPB spring training facilities were 40 years ago, the fans are basically just sitting on concrete steps with no grandstand, roof or even a fence separating them from the playing field.  The little metal tower rising from behind Oh`s head has a loudspeaker perched atop it and also appears to be holding up a backstop net to prevent foul balls from hitting the spectators.  Other than that, its basically just a really basic concrete shell.

And Oh`s pose is kind of a classic in a similar manner to the one in Nagashima`s - its obviously posed, but its distinguished enough from the typical posed shot to give it its own flavor.

The back of the card is titled "Oh: The player`s journey" and provides a chronological list of career highlights, beginning with his NPB debut batting seventh in a game in 1959 to hitting his 500th home run in 1972.

As you can see from the scan my copy of it is pretty beat up - the corners are heavily rounded but fortunately it doesn`t have any creases so the picture looks great (and the rounded corners provide a kind of interesting frame to it, reminding you that some kid in the 1970s probably carried this card around a lot).