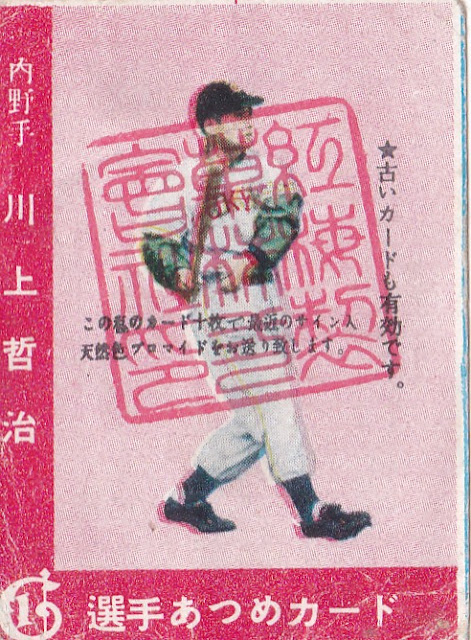 Here is something you don't see every day: a baseball card with a big red stamp with some archaic Chinese characters on it obscuring the player's image.

This is a card of Tetsuharu Kawakami, Japan's "God of Hitting" and first member of the 2,000 hit club.  It is from one of the 1953 Kobai Caramel sets (catalogued as JF 11, noted for the L shaped border) which is pretty rare (R3).

Kobai was the biggest maker of caramel cards in the 1950s, putting out dozens of sets.  Like my Kawakami caramel card, Kobai ones were small and printed on paper. 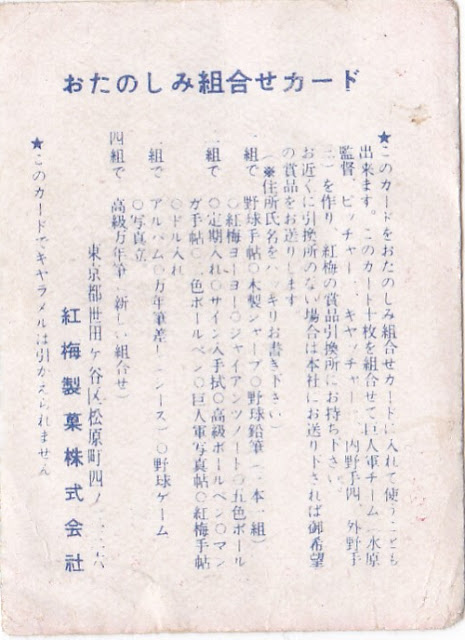 According to the back, they were meant to be collected and then sent in to the company to be redeemed for a set of bromides signed by the players.

Not all of the cards had the big red stamp (which I think is the company's official seal), so there are versions of this Kawakami card out there which don't have it.  I think the idea was that you would collect the cards with the stamps on them and send those in to be redeemed.  You had to collect ten of them which consisted of at least the manager (Shigeru Mizuhara), a pitcher a catcher, an infielder and an outfielder and then send those in.

Engel has identified only four cards from this set (Kawakemi, Takehiko Bessho, Shigeru Chiba and Wally Yonamine) but likely there were quite a few more out there back in the day, including Mizuhara who is mentioned on the back but does not appear in Engel.  Their fragility and the fact that they were meant to be redeemed probably contributed to there being so few left in existence.

I kind of like having the seal on this one, it gives the card such a unique and archaic look.  No mistaking this for a modern card, or an American one!