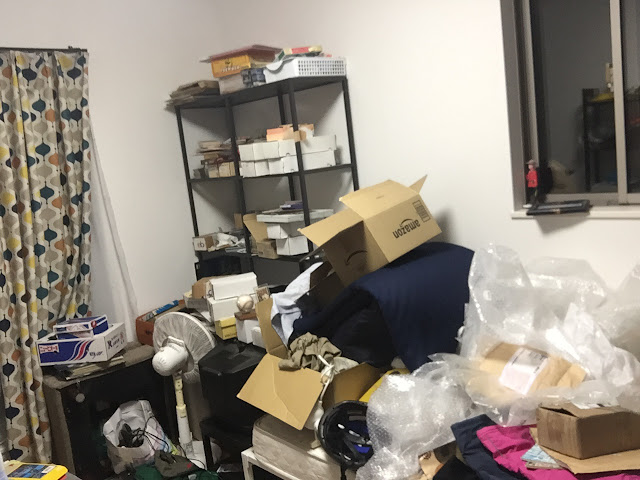 There is a pretty long thread over at Net54 in which people share pictures of their baseball card man caves.  Its impressive stuff, guys have whole rooms in their houses devoted to displaying some great collections of cards and other memorabilia.  Its the sort of stuff that would make for a good special issue of Home and Garden.

The above is my man cave.  Its our extra room.  Actually its not really "extra" anymore now that we have two kids, sometime in the near future this will be my daughter's room.  But since we moved into the house almost 4 years ago, its been the room where all my hobby stuff goes.

Um, yeah.  Its.....well, it is what it is.  A random mess of boxes and junk piled up everywhere.  There are actually some good pieces in there, basically every vintage card I've ever posted on this blog is somewhere in this picture, probably in one of those 800 card boxes.  You can kind of see a baseball in a ball holder in there too, roughly in the middle of the photo, that has my Hank Aaron autograph that is nearly faded to nothing after 28 years, which I think still counts for something.

I really like the concept of a man cave and I also like interior decorating, but since I've always known that I would have to give this room up at some point, I've never bothered to try to spruce it up into a neat cave.  Thus, my man cave room sucks.

This is also kind of a problem with Japanese housing: its way too small for man caves to begin with.  They don't have basements or studies, they come with exactly as many bedrooms as you have people and no extra space for anything at all.  This is a problem not just with residences but also work spaces, if you've ever been to any kind of Japanese office you've probably been overwhelmed by the sense of clutter since the people using it just don't have the space to properly store stuff.

Which isn't to say this is just a Japan thing, I'm sure a lot of people are pressed for space in North America too. I'm curious if anyone else out has a man cave like mine that by all rights they should be ashamed of due to its complete and absolute lack of any sort of attempt to make it presentable?  I suspect we may be the silent majority in the collecting community.