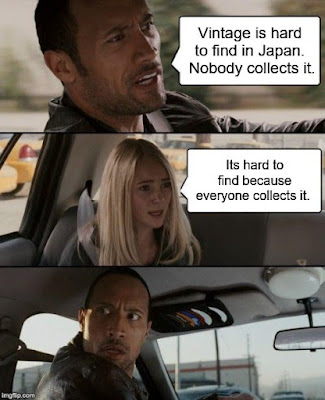 Yesterday I was able to sneak a quick visit to one of our card shops in Nagoya, Bits.  I picked up some supplies (which I'll probably devote a post to later) and some more 1980s Calbee cards for the sets I'm working on.

I also had a chat with the owner which made me rethink some of the stuff I wrote in a post a few weeks ago where I asked why Japanese people don't seem to collect vintage cards much.  Actually I think the individual observations I made in that post still stand, but the entire premise might not: maybe people in Japan are more into vintage than I thought.

This chat emerged out of my request to see the box of 1980s Calbees that he keeps behind the counter.  I knew it was there because he had let me browse through it on my previous visit with Dave.  I didn't have my 1983 and 1984 checklists with me on that previous visit so I had been meaning to peruse that box again with those in hand.

When I asked to see it the guy was almost apologetic, "I haven't added any to it since your last visit so its the same ones you saw last time"  he told me.  I explained the reason for my wanting to see it nonetheless and he handed it to me.  Then he started telling me why he has so few older cards.

"Until about a decade ago I used to buy older cards all the time" he said.  "People were just constantly bringing them in and I was constantly buying them."

Then, one day, people just stopped bringing them in.  Supply, rather than demand, had disappeared.

When I wrote my previous post I had kind of been under the impression that the reason card shops here don't stock vintage stuff is because nobody is interested in it.  But actually the opposite is true: they don't stock it because so many people are interested in it it has become hard to get (at least at prices that would make economic sense for a card shop).

Yahoo Auctions seems to have played the biggest role according to him.  Once people realized they could sell their old cards there, everyone stopped bringing them into shops to sell.  I suppose the same thing must have happened in the US years ago with the advent of Ebay (my card collecting days in North American pre-dated Ebay....and the internet....so I missed out on that transition).  Just cut out the middle man, it makes perfect sense.

This kind of jives with another fact that I've been noticing in the 6 years since I started this blog: prices realized for vintage cards have definitely been creeping upwards on Yahoo Auctions while supplies seem to be going downwards.  This is especially evident with 1970s Calbee cards that are selling for sky high sums, but I've also noticed it with my recent interest with menko.  The listings for menko a few years ago seemed to be a lot more robust than they are now, it definitely seems it is harder to find good stuff. And I constantly feel a sense of "I wish I had bought more while it was still available" when thinking of the stuff that I used to routinely find.

So anyway, while the market for vintage cards is definitely way smaller and less well developed than it is in the US, I'm starting to think I was over-stating the lack of interest.  Perhaps vintage is in!
Posted by Sean at 11:53 PM