It was raining heavily yesterday afternoon as I stood on the corner with an odd problem.  I needed to go to the Toyoko Inn near Nagoya Station, which seemed simple enough until I reached  the Station and realized there were two Toyoko Inns, almost across the street from each other.  Toyoko Inns, it seems, are about as common as convenience stores in Japan.  I went to the nearest one and as I stood outside the automatic lobby doors folding my umbrella I made eye contact with a smiling face on the other side and knew that I had chosen the right one.  Dave, aka NPB Guy, of  Japanese Baseball Cards and I were about to finally meet in person.

I've known Dave through our blogs since about the time I started mine back in 2013 and we've exchanged quite a few comments and emails with each other over the years, discussing our shared interest in Japanese cards, so I was quite happy when he reached out a few months back to see if we could meet up on the Nagoya leg of his massive Japan trip (I don't want to spoil it, but his blog will undoubtedly have some very interesting posts about that in the near future).  Fortunately he was coming to Nagoya on a Tuesday and I had a free afternoon, so we decided to do a little tour of Nagoya's card shops together.

In addition to my excitement about meeting Dave, I was also excited about being able to visit Nagoya's card shops.  Most of them are in parts of town I don't visit often and, with two young kids at home,  I just haven't had the time to check them out (almost all my collecting so far has been online).  This gave me the perfect excuse to get out and see them for myself.

I decided to break my recap of our afternoon up into three posts, in this one I'll focus on the first store we visited: Bits!

Bits had the advantage of being within walking distance of Dave's Toyoko Inn, so we wandered off in the general direction, aided only by the map on the store website.  As it turns out, the store was only a few minutes away (very close to the Kokusai Centre Station on the Sakuradori Subway line if you ever want to visit), but we did have a bit of difficulty finding it since there are no signs of the shop at street level.  We arrived at the spot where the map suggested it should be and found ourselves in front of a massive 1970s vintage apartment complex with retail stores and restaurants on the first two floors.  There was an external stairway which we decided to give a try and as soon as we reached the top we found ourselves right in front of the shop! 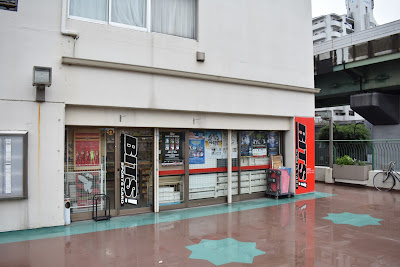 The inside of the store is really nice and very well organized.  They have tons of cards, mostly baseball and soccer with a small selection of "other" stuff.  Both Dave and I were only interested in the baseball cards.

Dave had brought several checklists for BBM sets he is working on with him and got to work browsing through the monster boxes.

I had brought with me my checklists for the 1975-76, 1984, 1986, 1987 and 1988 Calbee sets and was hoping to work on them but was initially a bit disappointed as I couldn't find any in all of those boxes.  I asked the store owner however and he produced a big pile of about 500 or so Calbees from the 1980s which were a joy to behold!  So I started going through my checklist too. 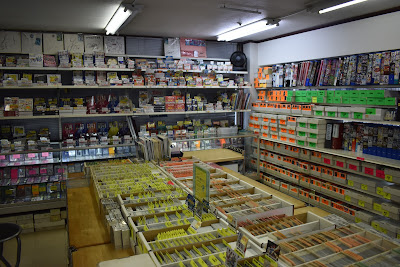 The storeowner I should note is extremely nice and very accommodating, he and his wife (at least I think it was his wife!) were there and were very helpful.  We chatted a bit and he said that they had opened the store in 2001 (the same year Ichiro went to the majors) but before that he had worked for a couple of years at a Mint in Yokohama (which is no longer there).  He found the fact that Dave was from Maryland interesting and we chatted a bit about Koji Uehara (who he said still lived in Maryland even after retiring - the level of detailed knowledge that every card shop owner should have!) 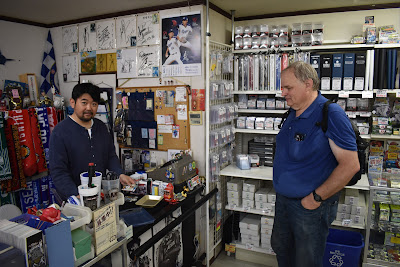 In addition to the monster boxes they had a ton of packs which might appeal to readers (though as a Calbee collector I just browsed them): 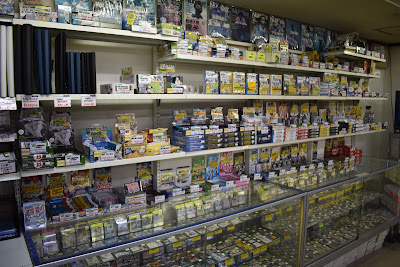 Dave was able to get quite a few cards knocked off his want list there and I walked out with these 16 cards which he only charged me 50 Yen each for (a real bargain).  14 of them were 1984 Calbees that I needed and the other two were a Bump Wills and Randy Bass card from the 1983 set: 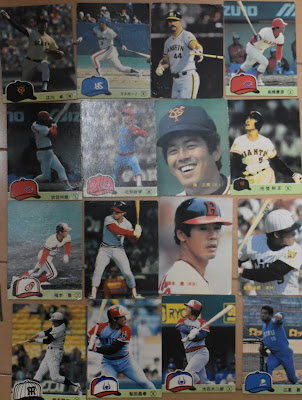 I also picked up some supplies there, mainly 12 pocket pages that are perfect for 1980s Calbee cards (my 1987 near set is currently in 10 pocket pages which look really awkward).

I kind of lost track of time but we spent a while in Bits, which was a good thing.  I really like this shop and the owners and will definitely be going back now that I know where they are and what they have.  If you are ever in Nagoya I would give this shop a high priority on your to-do list!

In my next post I'll cover the next shop we visited: Mint Ponyland!
Posted by Sean at 11:21 PM