1977 Path to Stardom: Featuring Stars Then and Slightly Before Then 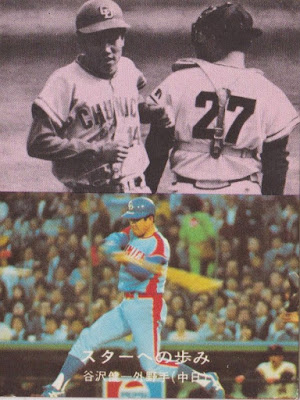 I haven't really been working on the 1977 Calbee set like I am with its predecessor, the 1975-76-77 Monster.  The 77 set is way more confusing since it is really several different sets, each of which they start the numbering again from "1" with.  The first of these (numbered to 216) really threw me off when I started seriously organizing my 75-76-77 set since the design of the cards, front and back, is identical and it took me a while to figure out that some of the cards which I though were part of my monster set were actually part of the 1977 set, which wreaked havoc on my checklist!

But since I've hit a wall with my monster acquisitions, I've also been picking up the odd card or two from the 1977 set.  One series from it which I thought was interesting is this one "Path to stardom" (numbers 73 to 109 in the confusing first set with the same design as the 75-76-77 set that cause me so many problems).

I have a couple of cards from it, featuring Dragons star and Meikyukai member Kenichi Yazawa (above) and Tigers star catcher Koichi Tabuchi below.  As you can see, the cards have two photos, a "now" one in color and a "then" one in black and white. 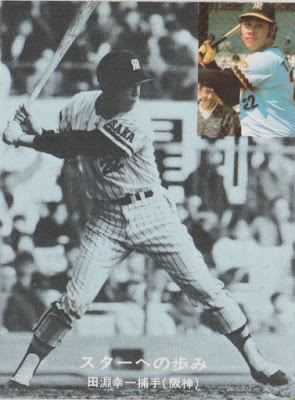 There is a similar series in the 75-76-77 set which has the same "Path to Stardom" name and also features the dual photo look.  That one is more like the "Boyhood photos of the stars" series that Topps put out in the 70s, featuring a picture of the player as a kid.

These 1977 ones though the "then" picture is one from their rookie year in NPB.  Its kind of odd, since neither of these players were exactly grizzled veterans when these came out: Yazawa had debuted 7 years earlier and Tabuchi 8.  The black and white pictures thus aren't ancient history, but just a few seasons old and for all anyone knew could have been contemporary with the set (except some uniform updates).

Its kind of a cool set though, these are a nice break from the full bleed photos of 1970s Calbee sets.