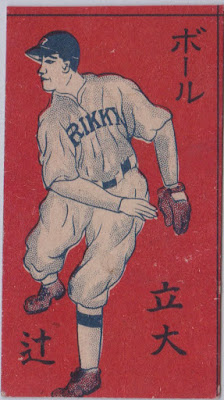 The above is card from the 1930 Big Six University menko set (JCM 144 in Engel).  It features Rikkyo University pitcher Takeshi Tsuji, a guy nobody has ever heard of but maybe should have, for reasons I'll lay out below.

Before I do, its worth mentioning a bit about Japanese baseball history here.  This card was made prior to the establishment of the first professional baseball league in Japan (the predecessor to today's NPB) in 1936.  Prior to that the Big Six University League (featuring Rikkyo, Waseda, Keio, Hosei, Todai and Meiji) was the highest level of organized baseball in Japan.  So the few baseball cards issued before the War usually feature Big 6 players.

I did a bit of online research about Tsuji, he graduated from Rikkyo in 1932 and would later manage the team in the 1950s.  I don't think he ever played in NPB.  But he seems to have a really huge claim to fame that I am a bit reluctant to state as the god's honest truth since I've only found one source saying this, but I'll put it out there anyway (with that caveat noted).

His claim to fame is that he is the guy who almost ended Lou Gehrig's consecutive games played streak!

In 1931 an American team did one of their barnstorming tours of Japan.  This tour is less well known than the famous 1934 tour, but did feature some big names, including Gehrig.  The American team played apanese teams from the Big 6 league and absolutely demolished them, winning all 17 games.

During one game in the tour (see this contemporary news account) Gehrig was hit by a pitch on the hand.  He was rushed to hospital and given treatment, but when he returned to the US in December his hand was still swollen and an X-ray revealed that it "wasn't by any means well."

In Gehrig's own words: "Two of those Jap(anese) pitchers were big fellows with a lot on the ball and American baseball methods.  I came up with the bases full and one of them dusted me off.  They play on skin diamonds and the ball is always roughed up. It didn't break anything but it was a bad bruise I guess."

By the time spring training came around, his hand had healed and so the incident didn't mess with his consecutive games streak and the panic died away.  Looking at English accounts I haven't been able to find anyone identifying the pitcher that plonked Gehrig, but according to this article (in Japanese) the culrpit was... Rikkyo pitcher Takeshi Tsuji!  The guy on my card!

I want to try to do a bit more research on this since its just the one source saying that, but its a pretty neat historical footnote to have dug up (and I don't have anything suggesting it isn't accurate)!

This card is crazy rare I should add.  Engel lists the set as R5, which means fewer than 5 copies of each card are known to exist.  And I got one! Holy crap, as I mentioned in an earlier post owning a card from a set this old with so few surviving copies does make you feel some pressure to not let anything happen to it! 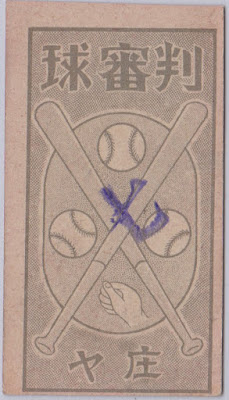 This is what the back looks like.  The purple stamp is the kanji for the number 7, I'm not sure what that is but it isn't uncommon for old menko to have stamps like that on the back which usually meant they were redeemable for some sort of prize.  Given how rare these are mine might be the only surviving copy of this card with a 7 on the back, which is neat.

I can also point out a small error in Engel's description of this set.  He notes he isn't sure if these should be considered menko since they lack some of the indicia of menko, like paper/rock/scissors symbols.  But if you look at the back, this clearly does have a paper/rock scissors symbol on it, the hand making the "rock" sign just below the bats!