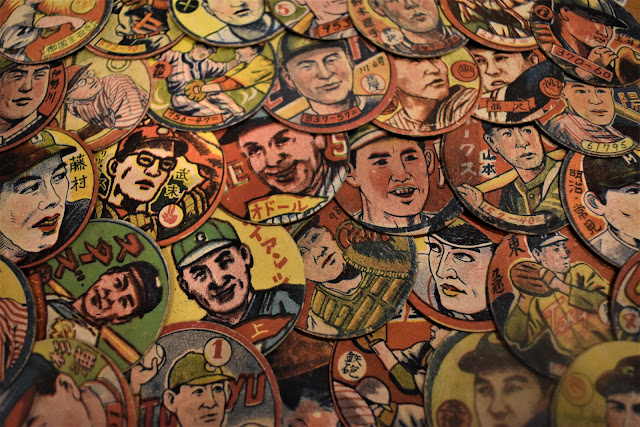 This is definitely the most satisfying purchase I think I've ever made.

I remember back in my teenage collecting days in the early 90s reading an interview with Al Rosen, "Mr. Mint", about some of his big finds in the 70s and 80s when the hobby was taking off.  He described once going to someone's house and the person bringing out stacks upon stacks of mint 1952 Topps cards, thousands of them, and piling them on a table in front of him.  Back then people still had these hoards lying around and sometimes didn't know what they were worth so guys like him could make a killing buying them up and then selling them to the collector's market.

These were kind of legendary tales by the early 90s since by then all those finds had dried up and everyone knew what cards were worth.  Get a call from somebody saying they had a hoard of old baseball cards to sell in 1992 and chances are you'd drive out to discover that they had a monster box full of 1988 Donruss commons that they thought were worth big bucks (I worked at a card store then, this happened all the time).  But oh what a legend it was to me reading that interview.....

Now almost 30 years later living in Japan, I'm discovering that you can still be the equivalent of a 1970s American collector gobbling up hoards of rare vintage stuff that people just don't seem to appreciate anywhere near as much as they should! In fact I made my own (very miniature) version of Al Rosen's 1952 find the other day.

An antique dealer put a hoard of 1940s round menko up for sale on Yahoo Auctions, broken up into several lots, a couple hundred or so in total.  Perhaps I shouldn't be giving away this secret, but antique dealers who don't specialize in baseball cards are the best dealers to follow on Yahoo Auctions for incredible baseball card finds.  The known card dealers all have established followings so when they put stuff up, everyone bids on it.  Antique dealers though are off of most collector's radars, so when they put incredible stuff up it can sometimes slip by without attracting the attention of other bidders, which I think is what happened here.

Sometimes, of course, antique dealers get junk.  In fact, probably most of the time they do.  But this wasn't one of those times.  I looked at the cards and all the ones pictured were rarities - stuff ranging from R1 (less than 1,000 copies known to exist) to R5 (less than 5 copies known to exist) in Engel.  Sometimes you will find old menko lots that have a lot of cards from sets like JRM 19, JRM 20 or JRM 26 which the market was flooded with a few years ago thanks to big finds of "dead stock" of those cards in mint condition.  But none of those were in it, these were all rare ones.  And most of them looked like they were in decent condition, another hard thing to find with menko of this era which were thrown around a lot back in the day.

So I bid high on all of the lots and ended up winning every last one of them. And oh what a joy were they to  receive!  A huge pile of unsorted beautiful, colorful vintage menko to go through!! 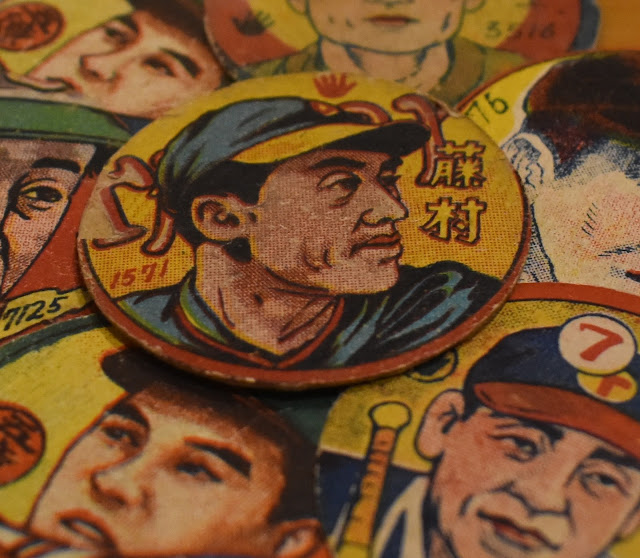 THIS is what makes a hobby fun!  Discovering something new and exciting (and being able to afford it because it isn't insanely expensive).

And you know what makes a hoard of 200 or so vintage menko even more fun?  Sorting them and putting them into binder pages!! Yay!!!

Just to add to my satisfaction level, I had a few dozen 12 pocket binder pages lying around.  I bought these a couple of months ago intending to put some of my 1980s Calbee cards in them but discovered they were too small for that (Ultra Pro 12 pocket pages are the right size, but these were from a different maker and designed for slightly smaller stickers of some sort).  But they were the perfect fit for round 1940s menko so I made my own album!

Sorting the cards proved to be a fun challenge since recognizing which set each belonged to took some getting used to (I had menko from about 20 different sets, including some uncatalogued ones).  Let me take you through some of the highlights of my new favorite baseball card album. 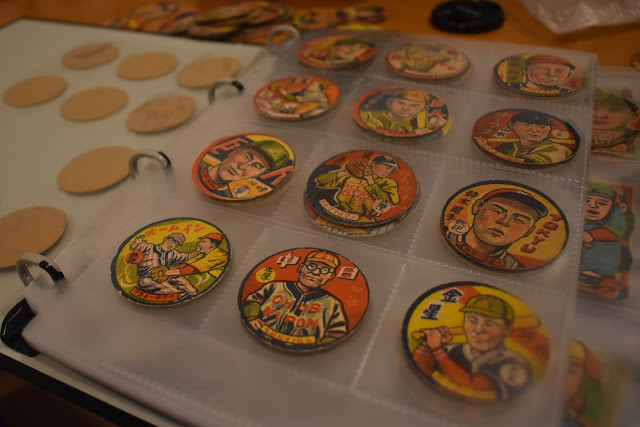 This is a 16 card set featuring some of the top HOFers of the era like Kawakami and Ohshita.  The easiest way to identify them is the little math question along the bottom border.  I have 15 out of 16 cards from this set now (12 are pictured, the other 3 are on the next page of the album), so just 1 more to go for the complete set!  And look how colorful they are! 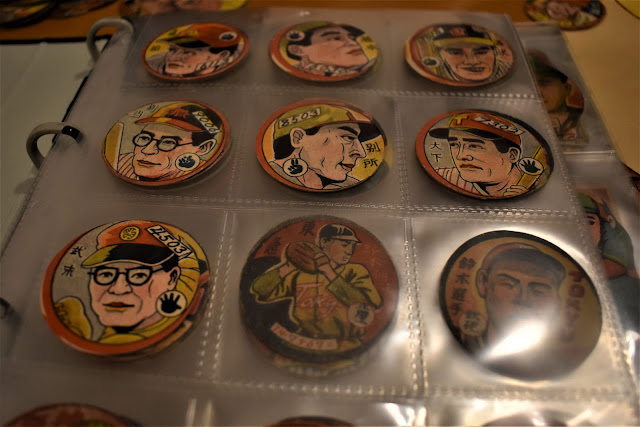 This is a smaller set at only 8 cards, and features stars like Michio Nishizawa, Kaoru Betto and Takehiko Bessho.  As you can see, I have 7 of them, which was a bit disappointing.  I found those 7 really early in the sorting process and thought for sure I'd have a complete set in there, but unfortunately, like the JRM 22, I came up one short.  The cards are recognizable by the menko number contained in the diagonal box along the front of the card. 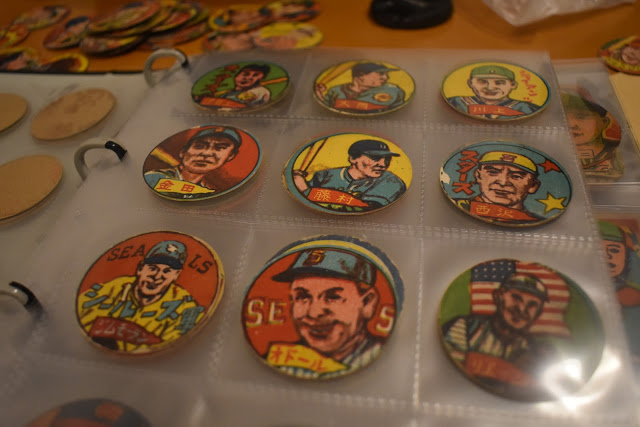 This was one of the more distinctive sets thanks both to the strong contrast in the colors used on the fronts and the backs, which have a unique design (most of the others were blank backed).  The set commemorated the 1949 Seals tour of Japan and features both Japanese and Seals players.  It is a 16 card set and I only got 9 so I'm not as close to the set as with the other ones.  But I do have the key card: Lefty O'Doul!  In fact I got doubles of him! 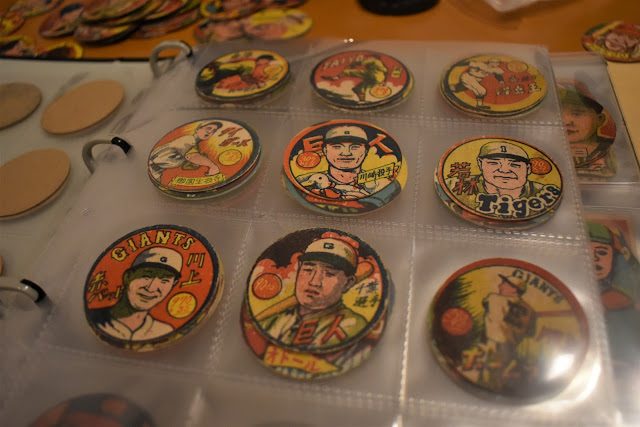 This set is pretty cool too, its distinguishable by the math problem in the little circle (either red or yellow) on the card front.  I only got 9 out of the 24 cards but that included the key cards of Bozo Wakabayashi and Tetsuharu Kawakami so not bad! 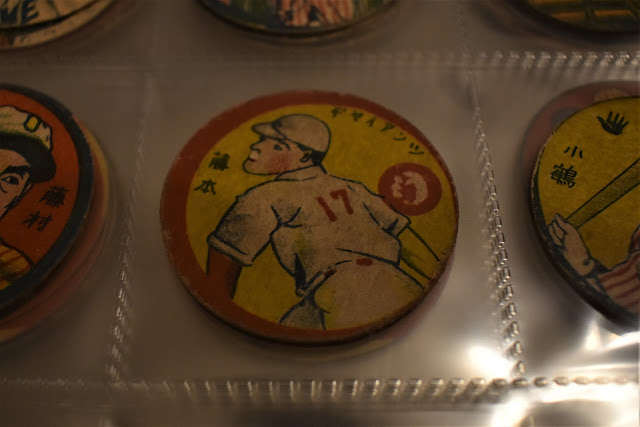 I only got one card from this set, of HOF pitcher Hideo Fujimoto (career 1.90 ERA, the all time NPB record).  This is notable though since it was the rarest card in the lot, that set is listed as R5 by Engel, so less than 5 copies of each are known to exist.  Engel only lists 5 cards in the set, but its one of those ones that is so rare that there may be some more undiscovered ones out there.

There were a few other sets in there where I now have 4-5 cards each of.  Some of these were uncatalogued, which is quite interesting.  Some more goodies: 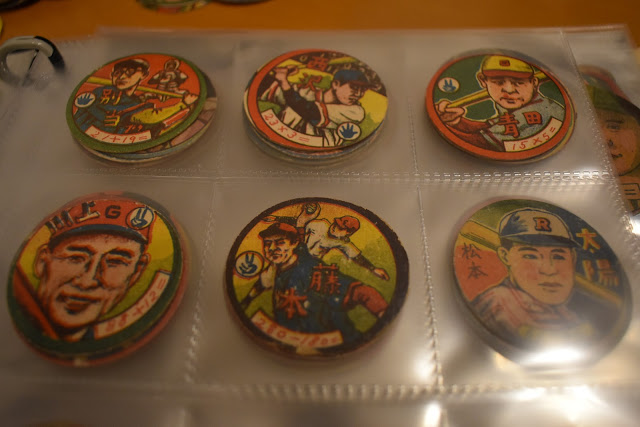 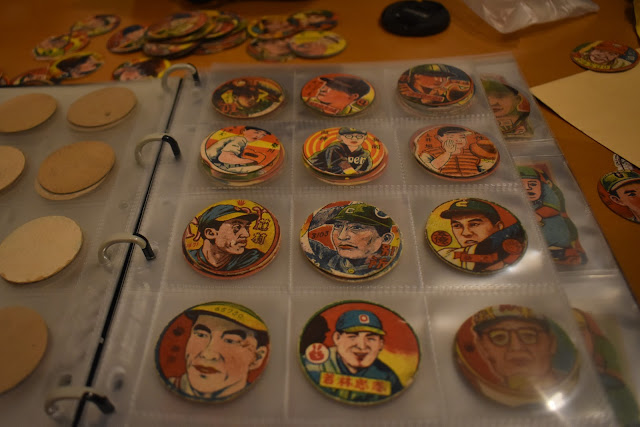 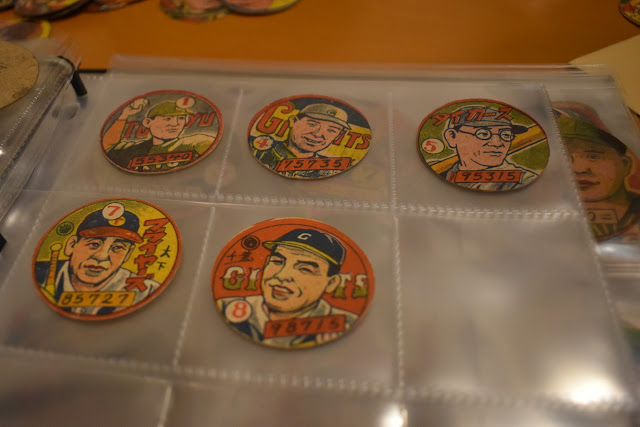 These ones, which I think are uncatalogued, caught my eye. 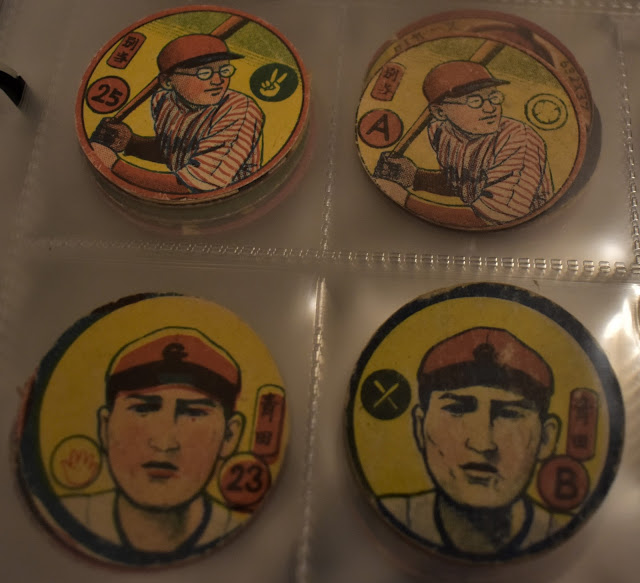 The uncatalogued sets are still only semi-organized in my binder pages so that is sort of an ongoing project.  Hopefully when Engel puts out the new edition of the guide some of them might be in it!

Now that I have all of these sorted into binder pages I have a collector's problem. I am hugely motivated to collect more of these and finish off those sets.  But I can't buy any of them.  These cards are so rare that not a single one of them is available for sale on Yahoo Auctions or anywhere else that I can find.

Its kind of hard coming down from a major "find" high like this, but its nice to at least be able to experience highs like this, which is what I am loving about collecting old Japanese cards.  Now the wait begins for the next antique dealer to put some huge lot of old menko up.....
Posted by Sean at 8:19 PM