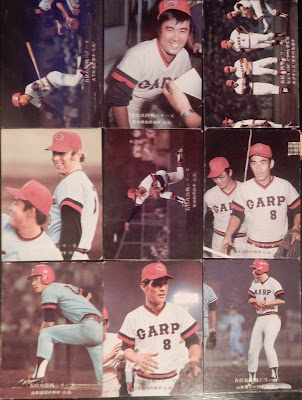 My 1975-76 Calbee project took another major step closer to realization last week with the addition of the 9 cards pictured above.  These are all from the rare series running from #145 to 180 under the title "Defending the lead series" which depict players from the Hiroshima Carp in various games down the stretch in the 1975 season (these were issued in 1975 so that is actually impressive as I noted in a previous post on another series from the set).

I already had a couple of cards of Sachio Kinugasa from this same series so these bring my total to 11.  The cards are rare because they are one of the regional issues that Calbee used to put out in the 70s, these ones being sold exclusively in Hiroshima (which compared to Tokyo or even Osaka is not a particularly big city).  There are three regionally issued series in the 1975-76 Calbee set which is one of the major stumbling blocks to putting a full set together (the others are a Chunichi Dragons set from 37-72 and another Hirohsima set from 609-644): at any given time most of these cards are not available for sale on Yahoo Auctions (or any other online source). Sports Card Magazine lists the commons from this series at 7000 Yen each, and one of the most expensive cards in the set (#157 featuring Hiroshima Municipal Stadium) is in this series.

I think I was very fortunate to find these.  A seller on Yahoo Auctions from Hiroshima put these beauties up for auction with starting bids of 1,000 Yen each.  I put a bid on all of them and they slid under everyone else's radar and I won them without any other bids being put in!  I love it when a plan comes together like that. Condition wise they are all OK for me, light corner wear on most but no creases or major damage, perfect for the mid grade collector!

It was so satisfying sliding these babies into their respective slots on the 9 pocket pages reserved for them.  Those pages had looked so empty, but now they are almost 1/3 full, which is respectable.  I only have a couple of the Chunichi regional issues and none of the other Hiroshima ones, so I'm now going to be on the hunt for those (and more of these)!

On the downside though....I just blew almost $100 on 9 cards which represent less than 1% of the total number of cards in this set.  Ladies and gentlemen, this is getting expensive.