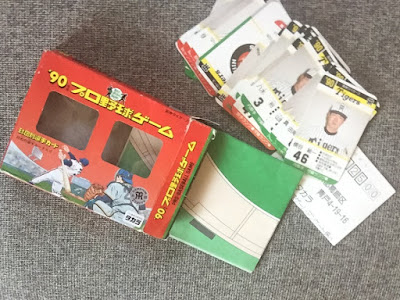 I took a trip to visit my parents in Canada earlier this year and one of the things I found while going through boxes of my old stuff was the above:  a 1990 Takara Hanshin Tigers game set.

These were actually the first Japanese cards I ever owned, I bought them at a card show in Kingston in 1991, years before I ever set foot in Japan or really had any interest in the country.  There was a dealer who had a huge pile of Takara game sets of various teams in a bin for $1 each.  Nobody, not even the dealer, knew anything about them, they were just novelty items that he had stumbled onto somehow (I'm curious what the back story was there) and was trying to get rid of.

I was 15 and I thought they looked neat, so I chose a Hanshin Tigers one and paid the man his dollar.  I chose the Tigers because I had read somewhere that Cecil Fielder had played for a team called the Tigers in Japan in 1989 and was hoping maybe they had stuck a card of him into the set even though it was from 1990.  They didn't, and I had no idea who the other players were or how to read any of it!

But my interest in the game didn't die there.  I brought it with me to the card shop my dad and I had co-founded and at which my best friend Mike also worked.  It just sat there for a few months.  Then one slow weekend Mike and I were bored and we noticed the game sitting there.  We had no idea how to read anything, but it came with dice and a fold out playing field and we could kind of intuitively figure out how it was meant to be played just by looking everything over.

So we decided to create an MLB version of it. We got regular baseball cards of all the star players in 1992 and, based on their statistics from the previous year, created a pretty complex schematic for awarding hits, home runs, etc to players based on combinations of dice rolls. We then tried playing our new game.  And it sucked at first, but after a few iterations we were able to have it make a bit more sense.  We played it a few times during slow times over the course of the year, but our enthusiasm waned after a while.  Making the game seemed a lot more fun that actually playing it was.

Since we never used the cards, they are still in mint condition.  The dice are lost to the ages, as are the original instructions, though the fold out field was still with it.  The thing I really would have loved to find, but didn't, were our hand written schematics for each player that we had drawn up.

Anyway, fast forward to 2019 and I was strolling through Yahoo Auctions looking for deals and stumbled on a 1997 Takara Yakult Swallows team game which was very cheap and I decided to pull the trigger on it for old time's sake. 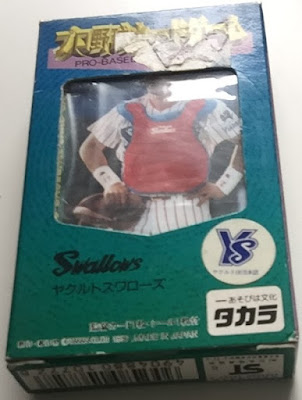 It's basically the same stuff as my 1990 Tigers set was: cards, dice, fold out playing field and instructions. 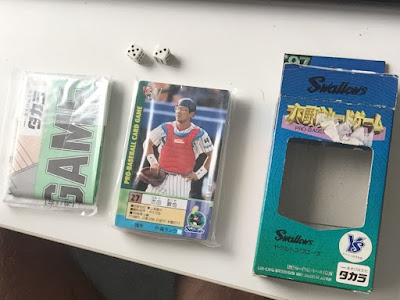 The playing field is pretty cool and exactly the same as the 1990 one. This brings me back. 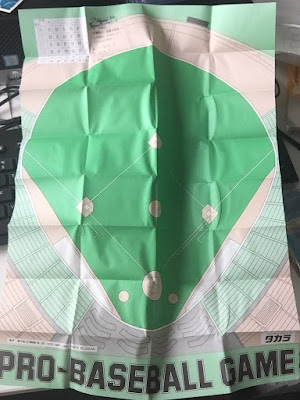 I've never really been into Takara cards as cards since the design is kind of blah, but there are a lot of them. 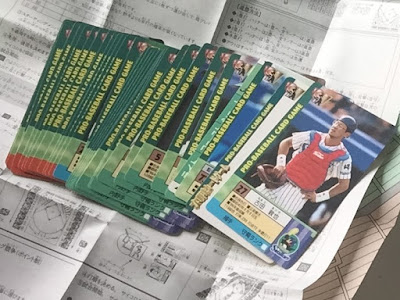 The backs of each gives you the schematic for the rolls of the dice for that player (each is unique). 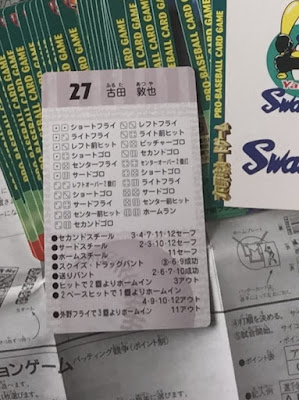 The big difference between 1991 me and 2019 me is that the latter can read Japanese!  So 28 years after buying my first one of these things I've finally gotten around to reading the instructions and figuring out how this thing is played! And it looks pretty fun, very similar to how Mike and I imagined it (Dave put up an English translation of the basics here).

But the problem is that I now live in Japan and Mike now lives in Seattle and I haven't seen him in person in over a decade.  So....shit, I can't play it with him.

Fortunately though as a father I have in my care two small human beings who I created and who may someday be interested in playing this game with me.  They are a bit too young and a bit too not able to sit still for more than 3 seconds and also a bit too not really knowing how to play baseball to make good opponents right now, but in a few years I think they will be.  When the time is right I'm going to whip this out and make them play it with me!

Its fun to have small things to look forward to.
Posted by Sean at 7:20 PM