I've noticed recently that prices on vintage (pre 1997) Calbee cards, and those from the 1970s in particular, seem to be selling for a bit more than they used to.  While I'm still getting pretty good deals on stuff, it also seems like I'm getting outbid more than I used to on stuff and am having to up my bidding strategies a bit to stay competetive.

Some cards in particular though seem to be going through the roof in price.  Yesterday an auction for 1973 Calbee card 125 provided a good example of this.  The card features Motoi Mitsuo and Higashida Masayoshi who played for the Lions in Fukuoka.  Neither is a hall of famer, though Motoi could be considered a "Hall of Very Good-er".

As I noted in an earlier post, Japanese collectors in general aren't too fussy about condition and this one isn't in the best, its got some stains on the back: 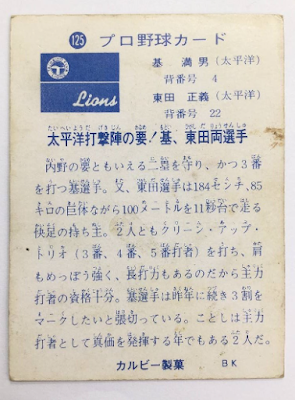 And rounded corners too.  Basically its a mid grade card that I would love to have in my collection because its a beautiful card to look at, I love those Lions uniforms from the 70s: 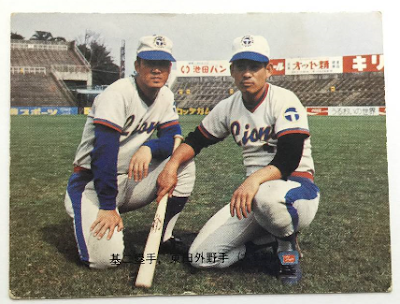 The price though is notable since my copy of Sports Card Magazine from 2010 lists this as a 30,000 Yen card, so it sold for more than 10 times what it was listed for 9 years ago.  It isn't even the most valuable card in the set according to that, there are several which list for higher.  Yet here it is getting 94 bids and being driven up to the price of a used car.

I think 1973 Calbee set collectors have been driving the price of these regional issues through the roof like this, there just aren't enough of them out there to satiate demand.  This is one of the main reasons that, despite my love for the 1973 Calbee set, I've kind of written off the idea of ever being able to put it together, the regional issues have become just way too expensive.  Its also a reason why I'm really in a hurry to finish off my 75-76(-77) Calbee set as soon as I can, its got a lot of regional issues in it too but thus far the prices on them havne't exploded like this!