Voila!  I have a Sadaharu Oh rookie card!

Since picking up the Engel guide a couple months back I've gotten a lot more into the old menko cards and I figured adding an Oh rookie to my collection was an obvious thing to do because....Oh.  Keeping up with the Jones's and all that. Well ,actually there aren't really any Jones's in the Japanese card collecting world to keep up with (the benefit of being in a niche hobby), but I wanted one anyway.  So I started scouring Yahoo Auctions looking for a nice one.

The problem with getting a Sadaharu Oh rookie card is that there are a lot of them.  1959 was the height of the tobacco sized Menko set era and they pumped out quite a few with Oh that year, so if you are looking for one you have a lot to choose from.  Many of them are attractive with vibrant colors and cool pics of a young Oh, which further complicates the choice.

I went for the green one, for no other reason than I like green, love the look of the card overall and it was the one that happened to be available at the time.  It is from the 1959 Doyusha set which Engel catalogues as JCM 30b.  According to this article on Sports Market Report from last year its one of his most famous, and also available, rookie cards.  Engel ranks the set at R1, meaning between 250 and 1000 copies of each card are known to exist.  By American standards that would be extremely scarce, but by Japanese menko standards it puts it among the easier to find.

The back of the card is printed in blue ink, and has the Giants logo and Oh's name and position on it, along with a rock-paper scissors game and number.  Mine also has a purple splat on the left side of the back.  I think this was a mark by the manufacturer put on some cards which identified them as redeemable for a prize or something.  A lot of menko have stamped marks like that for that reason, though I'm not 100% sure, usually they have a number or something but mine is just a splat. 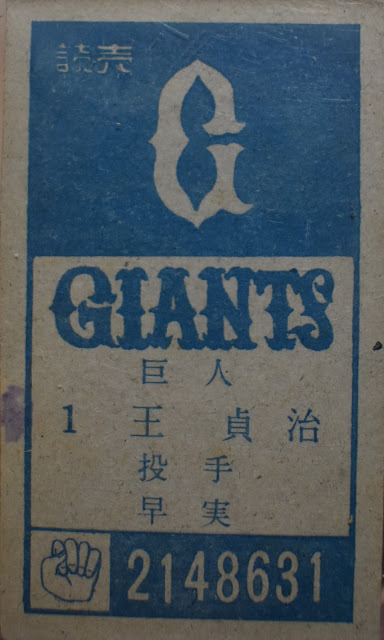 This set me back about 10,000 Yen (100$) with shipping, so its one of the most expensive Japanese cards I've ever bought, but I think worth it.  I guess having so many different rookie cards keeps the price of any one of them quite reasonable despite him being the home run king and there being so few of them.  Its also one of those things where there is an odd lack of demand in Japan for something that is so popular overseas: looking at past auctions these seem to sell for a lot more in the US.

Other than the splat, this card is in surprisingly nice condition.  These were hand cut from sheets back in the day so the borders are not 100% straight, but pretty good compared to the butcher jobs I've seen on some.  There are no creases or even much corner wear either, it would probably grade about Ex or so (except for the splat).  I say its surprising because in my experience there are very few menko from this era which exist in mid grade condition like that.  Owing to the nature of the menko game, they are usually either completely destroyed, or in pristine mint condition still uncut from their sheets.  Once kids cut them from those sheets, they usually got thrown around like crazy!