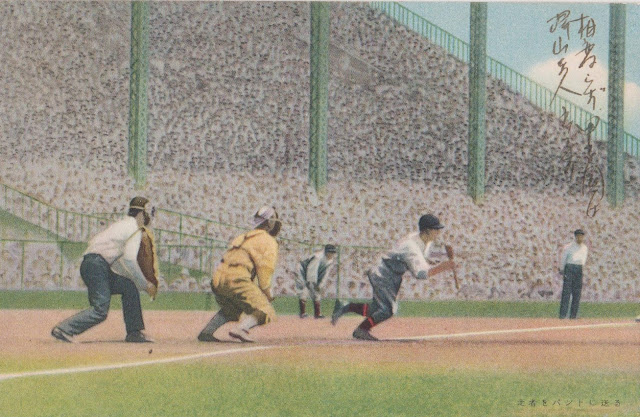 I picked up this postcard off of Yahoo Auctions last week.  It is a colorized photo of a scene from the 21st Japanese High School Baseball Championship, held at Koshien Stadium each year.  This is the 1935 event and the scene depicts a player from an un-named team laying down a bunt.  Matsuyama won the championship that year, but I have no idea if this is from the final game or from a game with other teams earlier in the tournament.  I really loved the scene which is why I bought it (there are a lot of pre war baseball related postcards but most of them are kind of boring to look at).

This one was actually sent to somebody, judging from the postmark it was sent in October 1935 from the post office in Hirano.  There are several places by that name in Japan but I think Hirano ward in Osaka, which is not far from Koshien, is the most likely.  The handwriting on the back is very difficult to read so I'm not sure what the message is (something about being on a mountain the other day but that is about all I could make out). 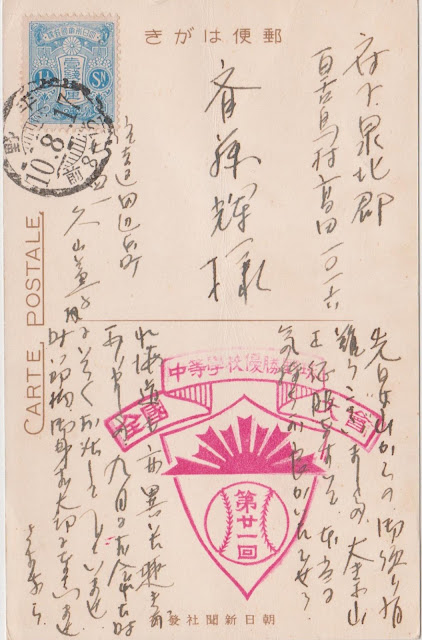 The postcard was printed by the Asahi Newspaper company, which sponsored the championship.  Not sure if this was distributed through their newspaper or perhaps sold in stores or at Koshien.  The red stamp on the back is what tells us it was from the 21st Championship.

I think I might frame this to put on the wall, it looks pretty cool!
Posted by Sean at 9:02 PM