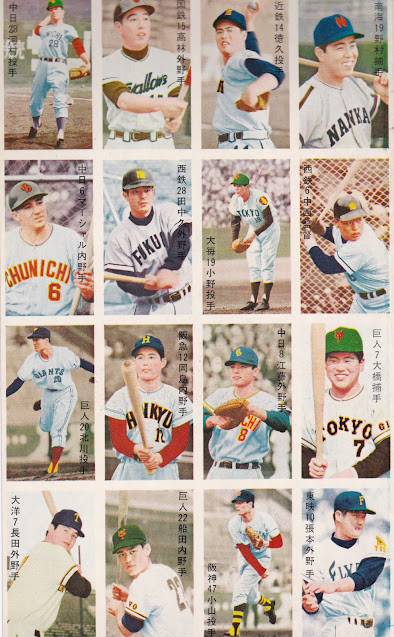 This is an uncut sheet of 16 cards from the 1963 Marusho Flag Back set (JRM 13c).  The complete set is 40 cards so this sheet has almost half of them.  It looks miscut in the above image but that is just because my scanner was slightly too small and cut the top and bottom edges off.

This set is one of the few vintage menko baseball sets that is easier to find in the United States than it is in Japan.  Back in the 1960s Americans Bud Ackerman and Mel Bailey imported a lot of Japanese cards to the US and this set was among them.  You can read about it more on Dave's excellent post about the history here.

So in the US its quite a bit easier to find than other menko sets.  In Japan in contrast its not really noticeably easier or harder to find than most other sets from the same era.

This sheet never left Japan.  The ones that were imported to the US (by Buck Ackerman with this set) had numbers stamped on the backs.  This one doesn't have any numbers stamped on it which, along with the fact that I bought it in Japan, means it wasn't among those exported: 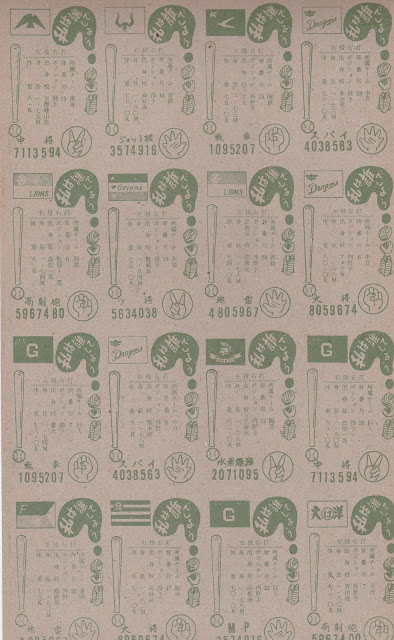 This sheet is missing the key card from this set - Sadaharu Oh - but it has two of the other big names.  Isao Harimoto, Japan's all time hits leader and all around amazing guy, is on the lower right card while Katsuya Nomura, #2 on NPB's career home run list is on the top right one.