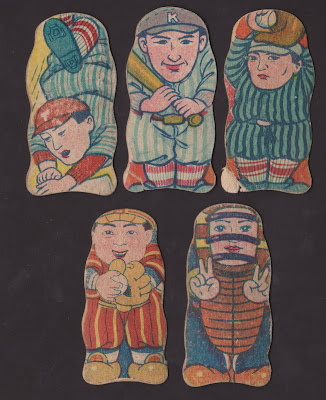 Following up on the theme of my previous post, I have a few more "discoveries" to post about here.  This time the subject are previously unknown (or at least uncatalogued) die cut menko.

Die cut menko are some of the most interesting Japanese cards around due to their unique shapes and brilliant colors.  The Engel guide lists a couple of sets of them from 1930, but the vast majority were issued in the late 1940s and none (at least none of the catalogued ones) came out later than 1950.

They are interesting from a historical perspective since their 1947-1950 heyday occurred entirely during the occupation period when Japan was going through a period of famine and extreme poverty due to the destruction of its economy during the war.  Yet that period of impoverishment produced arguably the most interesting and attractive baseball card sets, with designs in some ways far superior to ones issued in later decades when Japan was a much wealthier nation.

I suspect part of the reason for this is that in the late 1940s these were the only toys that were available to kids.  Other materials like metal or wood would have been devoted to more pressing objectives than kid's toys at that time, so that left the kids with stuff made from paper or cardboard to play with.  So they had to make them fun and exciting. Cards made in the late 50s and 60s didn't have that pressure on them since by then the country had recovered and kids had a lot of other things to play with.

I picked up these five cards above a couple years ago and am only now getting around to actually posting about them.  They aren't from any of the sets listed in Engel and, from the differing back designs, seem to come from three different sets. 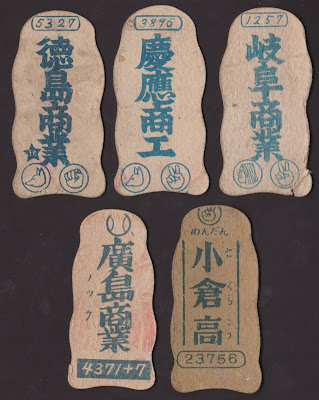 The backs also make clear that these are not NPB players, but rather amateurs.  The kanji on the back of all of them are the names of schools (Tokushima Shogyo, Gifu Shogyo and Kokura Ko are the three whose names I recognize, the other two I can't read the kanji off the top of my head but are also school names).  All three of those have fielded teams in the famous Koshien summer tournament and likely these sets fetaured teams from the tournament (all three that I identified appeared in the 1949 tournament, so likely the sets are from that year).

I do like the attempts at action shots in them, like the player depicted sliding into a base (the Tokushima card).  I also love the catcher flashing the "V" sign that everybody in Japan instinctively does when a camera is pointed at them - I guess that was a thing even back in the 1940s!