The Most Insanely Colorful Set of All Time: 1975 Pepsi Dragons Menko 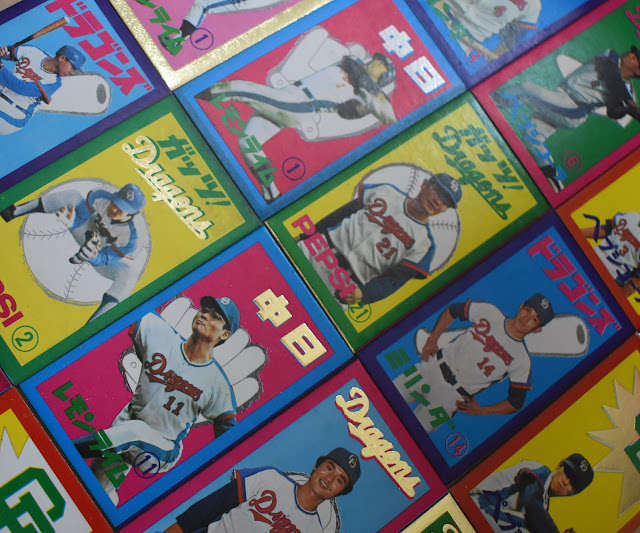 Today I present some cards from the 1975 Pepsi Dragons set (JCM 71).  It is the most colorful set of cards....or anything for that matter...that I have ever seen.  I feel I should probably have put a disclaimer at the top of the post warning that these cards may induce photosensitive epileptic seizures in some readers.  They are that insanely colorful.  They make the 1972 and 1975 Topps sets look like 1948 Bowmans.

I fell in love with this set a couple of years ago when I saw the first images of it online, but I hadn't been able to get any actual cards from it until recently.  Its a fairly rare set (Engel rates it R2) and was probably only issued in the Nagoya area (it only features Chunichi Dragons players).  Every once in a while a beat up little pile of them would show up on Yahoo Auctions with a high BIN price, but never anything enticing enough for me to buy one.  I waited so long I was getting tempted to splurge on one of the beat up ones just to have a single from the set though.

Then it happened.  An antique dealer (love em!) put a huge pile of them up for auction last week with a low starting bid and I scooped up an amazing find of these.  72 of them, almost all in minty condition!  What a haul! 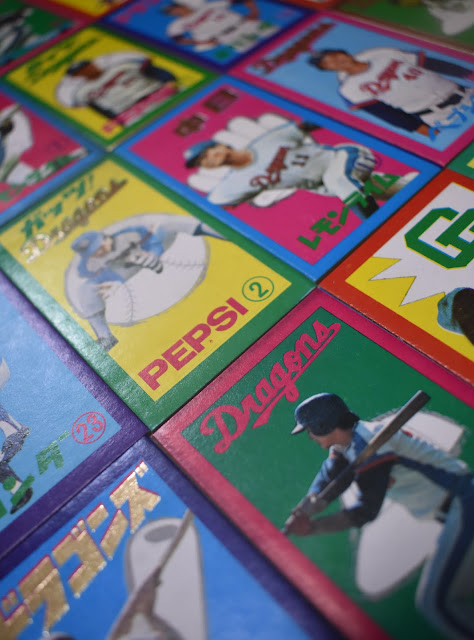 When I received them, most of them were wrapped in bundles of 8 like this: 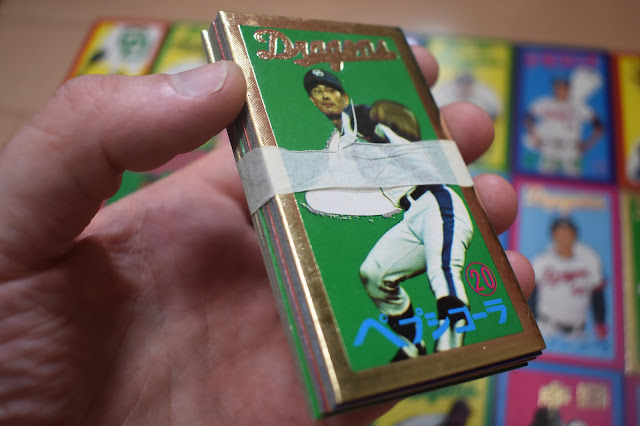 Its pretty flimsy but I suspect this is how they were originally distributed.  These were given out in selected stores one by one to the purchasers of Pepsi and other drinks put out by Pepsi Co like Mirinda (a Spanish drink that used to be sold in Japan but no longer is).  I assume they had stacks of these by the cash register and just handed them out. That must have been a pretty cool site.  I'm curious if they had any similarily colorful promotional ads for this campaign (posters, etc), as those would be neat.

I mentioned that "almost all" of the cards I got were minty.  One of these bundles had obviously been dropped by somebody as all the cards had the same dinged lower left corner, but otherwise the cards all looked like they had come straight from the factory.

The backs of the cards aren't quite as colorful as the fronts, but then nothing is: 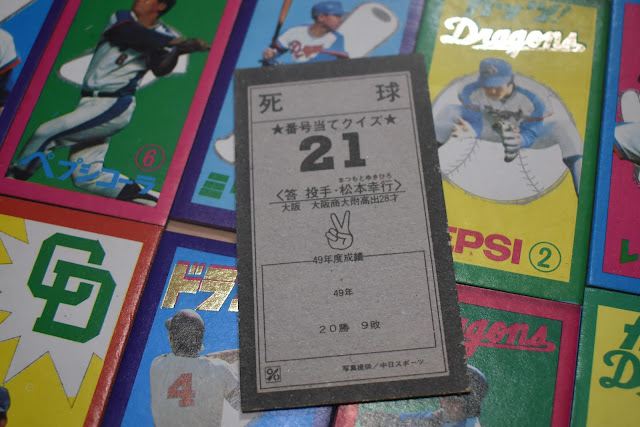 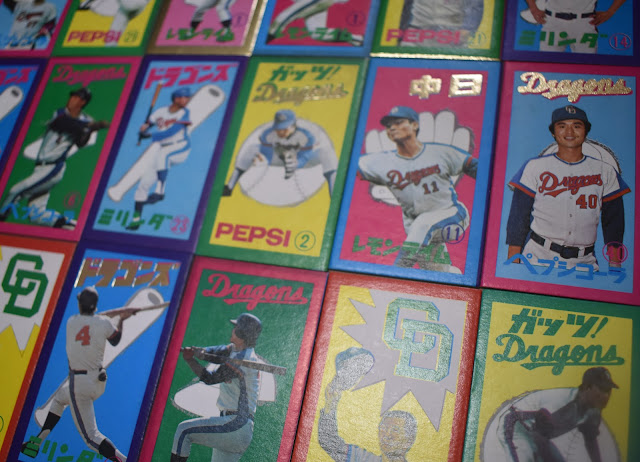 One of the things that surprised me (in addition to the colors of course) about the cards was how big they are.  Looking at them in photos omline I had assumed they were the same size as the tobacco sized menko, but these are actually much bigger, the dimensions are close to those of standard modern baseball cards (just slightly narrower).  And they are on insanely thick cardboard, even for menko, which makes them kind of neat to hold. 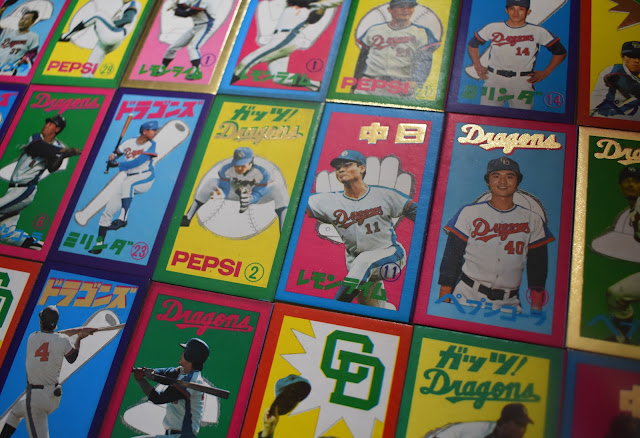 The complete set has 20 cards and guess what? I was able to put together an entire set from the lot!  Here they are: 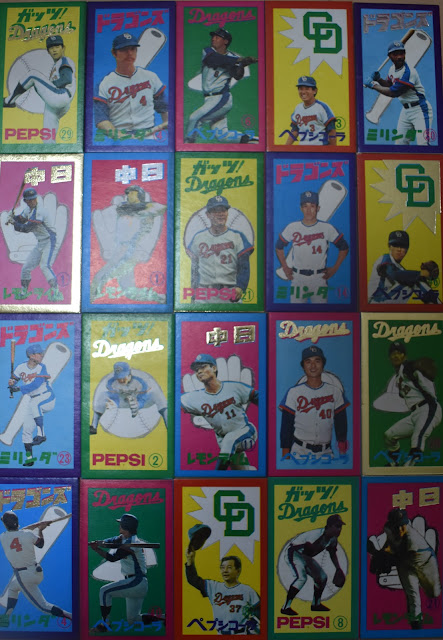 Its got a few Hall of Famers, the most notable being Wally Yonamine (manager) Morimichi Takagi (who would also later manager the Dragons), Senichi Hoshino and Kenichi Yazawa.  It also has two American players: Ron Woods and Gene Martin.

There are quite a few major variations in the 20 cards in the set, basically the same card comes in multiple color schemes.  For example, here are two of the Wally Yonamine cards, same picture but radically different background color schemes (also one has silver embossing while the other doesn't): 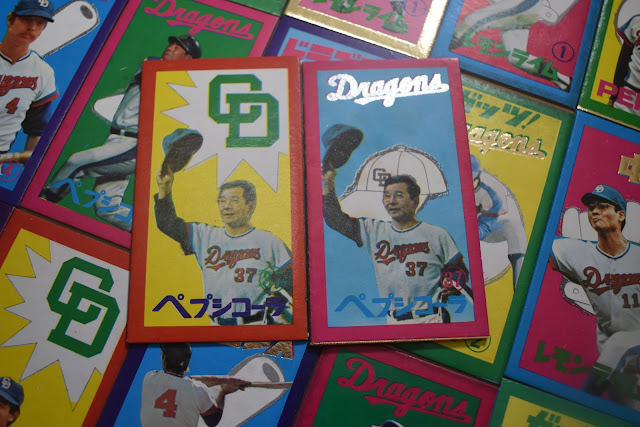 According to Engel there are up to four different versions of each card, though it doesn't seem to actualy be known how many variations exist in total.  There could  be as many as 80 cards in the "master set" if each card comes in four different color variations.

Unfortunately my lot wasn't big enough to figure that out, but putting together a master set would definitely be a challenging goal to pursue and one that probably nobody has accomplished to date.  I also have to keep looking for cards from the 1976 Pepsi Menko set which I haven't been fortunate enough to find a major pile of yet.  I'll have to find another big lot to do that.

Just writing this post has made me want to drink a Pepsi, so I can say that they are a pretty effective marketing tool.  For some reason in recent years it has become difficult to find Pepsi in Japan though.  Pepsi Co still sells tons of drinks in Japan, but for some reason they don't seem to sell just regular Pepsi anymore (just crappy versions of it like Pepsi Next or whatever.....)  Its kind of unfortunate as Pepsi put out a lot of really cool baseball promotional items in Japan over the years, the most recent that I recall being in 2001 when they put little Ichiro figures onto bottles of Pepsi.  I have a set of those somewhere that I actually put together in 2001, I'll have to dig them out for another post!