This is a Truly Amazing Discovery 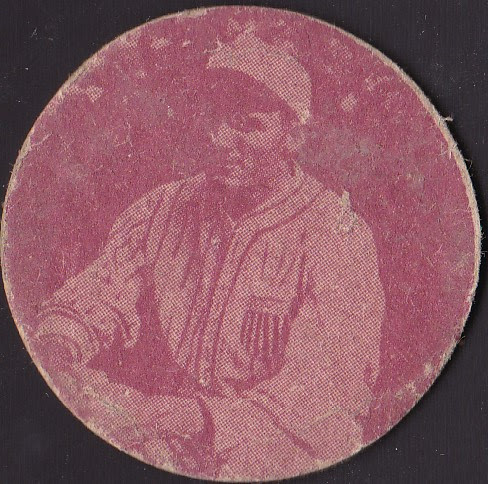 I made a really major find the other day.  Probably the biggest find I will ever make.

The above card featuring Hall of Famer Frankie Frisch is the only known surviving copy of a menko from the 1931 Major League All Star Tour of Japan.

Until today nobody knew this existed (well, at least the internet did not know it existed).

In 1931 a group of Major League all stars did a 17 game tour of Japan.  It featured some of the biggest stars of the time - Lou Gehrig, Mickey Cochrane, Lefty Grove, Al Simmons, Lefty O'Doul, Highpockets Kelly, Rabbit Maranville and Frankie Frisch to name a few.  The 1931 tour isn't quite as famous as the follow up 1934 tour which added Babe Ruth to the lineup, but still it was an impressive team.

Until now there were two known extremely rare bromide sets released to commemorate the tour, which Engel catalogues as JBR 105 (put out by a company called Yuasa) and JBR 106.  These feature some of the big name American players (JBR 106 also features some of the Japanese players who faced them).  There are fewer than 5 known copies of each card in both sets so for each of those the card is probably the player's rarest in the world.  I can't imagine what a Gehrig from one of those sets would go for if one ever came up.  Rob Fitts wrote a good article about them a few years ago which you can read about here.

The thing is though, while those bromides have been known no menko sets from the tour (or the 1934 tour for that matter) had ever been discovered.

That was the case until a few days ago when an antique dealer from Yamagata put up a small lot of four pre-war baseball menko for sale on Yahoo Auctions.  His father, who was born in 1925, had collected menko as a child in the 1930s and these had been in their possession ever since (most of the menko were non-sports, being sold in a seperate lot).

This was the lot photo here: 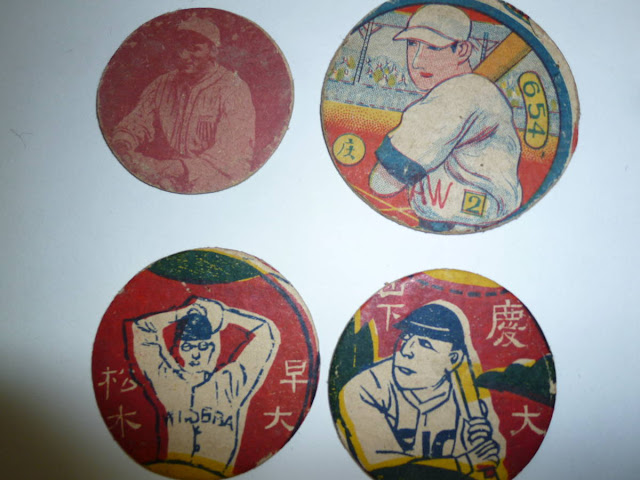 Neither the title nor the description of the lot identified it as containing the card of an American Hall of Famer.  The dealer had no idea what they were and just listed them as rare pre-war menko featuring baseball players.
When I first saw the image I ignored the Frisch since I had no idea what it was and instead focused my attention on the two on the bottom.  These feature two prominent Japanese Hall of Famers from the 1930s -  Kenjiro Matsuki and Minoru Yamashita - during their university days (the card in the upper right corner is a generic one and not of much value).   These were pretty decent finds in their own right- they don't seem to be in any catalogued set either.  I'll probably do a post about them in the future.
So I bid on the lot on the basis of those two.  But as the auction ran my attention turned to that menko in the upper left corner.  Who was that?  Looking at it more closely I realized that it was a foreigner, and after doing a bit of research I realized he was wearing what looked to be a uniform from the 1931 tour!
This really piqued my interest and I upped my bid accordingly.  This lot was not going to get away from me.
My first thought was "WHOA- is that a Lou Gehrig card?"  It was a bit hard to see his face in the scan, but I could tell enough to determine that it wasn't Gehrig.
I started combing the internet for pictures from the 1931 tour hoping to find the original so I could identify the player.  Eventually I discovered this: 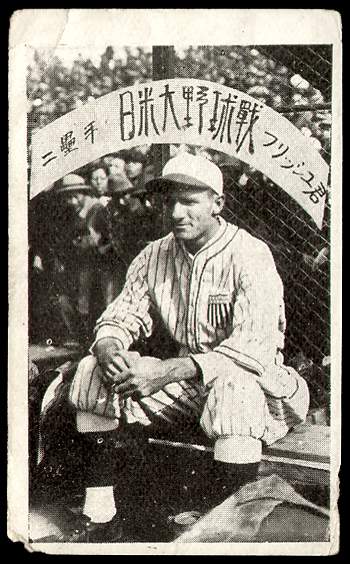 Bingo! This is Frankie Frisch's card from the JBR 106 set which sold in a Prestige Collectibles auction 12 years ago.   The photo was identical, I had found the player!  And Frankie Frisch is, while not quite Gehrig, still a pretty damn good Hall of Famer if there ever was one.

I think this menko find is really exciting news not just because we have another Frisch card, but because of what else it indicates might be lurking out there.  Did they make menko for other big name players from that tour (like Gehrig and Cochrane) or from the 1934 tour (which had Ruth)?  If so, did any of them survive, or is this Frisch the last one in existence?

I'm very excited with this discovery and will be paying WAY more attention to every single card that shows up in a big lot of pre-war menko from now on to see if I can answer any of these questions. This is what I really love about collecting Japanese vintage cards, it makes you feel like an archeologist finding interesting new things sometimes.

Anyway, this Frisch card is now the new centrepiece of my collection.