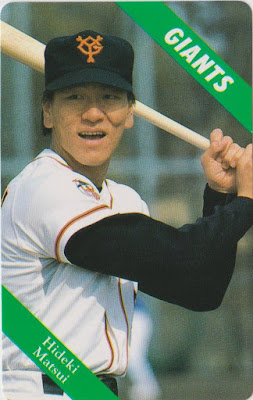 I`ve been doing a lot of posts about 1970s era cards recently, but I`ve also added a few beauties to my early 1990s Calbee collection, including a 1994 Calbee Hideki Matsui.

The 1994 Calbee set is, along with most pre-1998 Calbee cards - kind of a hard one to collect since there isn`t a huge supply of them out there.  Yahoo Auctions only has 115 listings for 1994 Calbees at the moment, and these actually come from two different sets.  The main set, which this one is part of, has the player and team names written in diagonal stripes on the lower left and upper right corners of the card.  A second set, which I think was only sold regionally and is thus even harder to find, lacks these stripes, has colored backs (the main set has a black and white back) and each number begins with c.

This Matsui card (#47) isn`t his rookie card since he appeared in both BBM`s 1993 set and also on a 1993 Calbee card (which has a similar design to this one), and he also has a couple of more cards in the 1994 set.  This makes it a reasonably affordable buy, they seem to go for around 500-1000 Yen each when they show up in auctions (which is how I go this one).  Not sure how much they go for on Ebay.

Anyway, its a cool card - showing Matsui when he was barely out of high school - and is the earliest calbee card I have of him so I`m glad to add it to the collection!