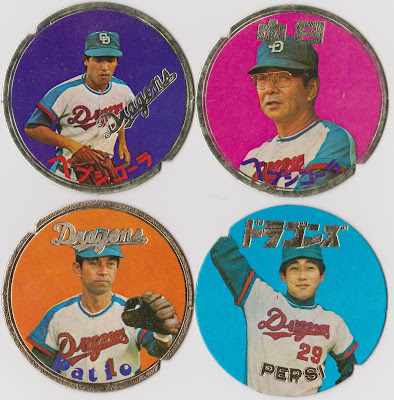 Another day another Yahoo Auctions pick up.

I got these four from the 1976 Pepsi Chunichi Dragons Round Menko set (JRM 13 in Engel).  I had picked up seven others from the set earlier this year, so these give me 11 in total.  I really love this set, the bold colors and gold foil give them a really striking appearance.

I'd like to complete this as a set, but I'm a bit unsure of how many there are.   Engel says there are "60 +" cards in the set, implying there may be some not in the catalogue.  He also only lists 29 players and two team logo cards, but most were issued with different colored ink on the back, either in pink, brown or violet, which I think gets you to 60 cards with those variations.  The four cards I got in this lot were all brown ink backed, though the ones in my earlier acquisition came in a variety of colors. 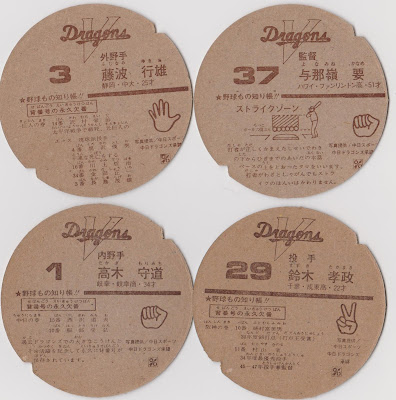 Fortunately these new additions contained the card of Hall of Famer Wally Yonamine, who managed the Dragons from 1972 to 1977.  He is of course also famous for being the first American inducted into the Japanese Hall of Fame.  I only had one old bromide of him, so I'm glad to add a menko featuring him to my collection. According to Engel his card is the most valuable in the set.

I also got Morimichi Takagi, another Hall of Famer (and recent Dragons manager) in the lot too, which is kind of cool.  Takagi's card is the only one that doesn't say "Pepsi" or "Pepsi-Cola" on it, but instead "Patio" which I assume was another soft drink that Pepsi sold in the 70s (doesn't exist today!)

These were a pretty huge steal, just 500 Yen (about 5$ US) for the lot! The Yonamine alone books for 35$ in Engel, so this is another one of those "Japanese under appreciating their old cards as reflected in how cheap they sell for" things.  The Yonamine does have a small crease in it but otherwise they are in pretty nice shape.