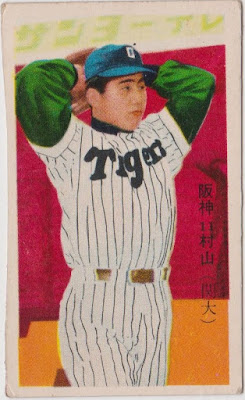 This is another recent pick up: Minoru Murayama's 1959 Maruya JCM 69 Menko.  Murayama was one of the top pitchers in Japan in the 1960s, winning three Eiji Sawamura Awards (Japan's equivalent of the Cy Young Award) and compiling 222 career wins, all for the Tigers.  He was inducted into the Hall of Fame in 1993.

This card really appeals to me.  A lot of menko from that era used colorized black and white photos which sometimes result in very weird color combinations.  This is one of them. I assume that whoever was colorizing the pictures just had the black and white image to go on and had no idea what color everything in the photo actually was.  Did Koshien Stadium really have pink walls back in 1959?  Or orange grass?  Were Tiger hats blue?  Did Murayama wear a green long sleeved shirt under his jersey?

I'm pretty sure the answer to all of these is no, but the oddball color selection really makes this card speak to me, way more than an actual color photo would.

The back is also cool, it shows you how to hold the ball when you throw a slider. 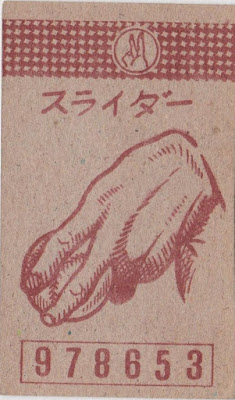 Engel lists this set as R3, meaning less than a hundred known copies of each card exist.  I have a couple other cards from the set  but its going to be a tough one to complete (it has a very expensive Sadaharu Oh rookie card in it).  The set collector in me really wants to work on completing some of these menko sets from the 50s and 60s, including this one, but financial realities are going to collide with that ambition.  Still though, the lull in 1975-76-77 Calbee cards that I need coming up for auction is allowing me to focus a bit more on getting these beauties and I feel almost like I'm having a secret affair with them behind Calbee's back.  I'm definitely not a philanderer in my real life relationship (happily married for 16 years) but my card collecting persona seems to lend itself to falling in love with whatever colorful object is dangling before me at a given moment.  Right now its menko cards.