Opinion: What Hank Aaron and Sadaharu Oh tell us about the Ichiro vs. Pete Rose Debate 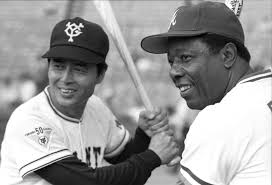 Here is an interesting piece of baseball trivia.  In 1977 Sadaharu Oh hit his 756th career home run in NPB, surpassing Hank Aaron`s recently set MLB record of 755.  Aaron was gracious enough to send this message to Oh to mark the occasion:

I would have loved to have been there tonight to put a crown on top of his head because he is quite a gentleman and the people of Japan have a lot to be proud of...I want to wish (Oh) the best luck in the world. I know he's capable of hitting a lot more home runs." (source)

Oh and Aaron became friends after that and together have played a pretty big, and positive, role in promoting baseball ties between their respective countries.

This week, in contrast, Ichiro Suzuki surpassed Pete Rose`s career MLB hit total with his 4257th career hit across both MLB and NPB combined. Rose`s gracious message to Ichiro to mark the occasion (sent indirectly through the media):

“I’m not trying to take anything away from Ichiro, he’s had a Hall of Fame career, but the next thing you know, they’ll be counting his high-school hits.  I don’t think you’re going to find anybody with credibility say that Japanese baseball is equivalent to major-league baseball. There are too many guys that fail here, and then become household names there, like Tuffy Rhodes. How can he not do anything here, and hit 55 home runs (in 2001) over there? It has something to do with the caliber of personnel.”


Despite having done nothing wrong, Rose`s lack of diplomacy has forced Ichiro into adopting an almost apologetic tone when discussing his accomplishment.  Instead of being allowed to celebrate he is evidently being made to felt shame for his mark.

Rose`s response is unfortunate for two reasons.  First and foremost it displays a shocking lack of class and dignity.  He even manages to denigrate poor old Tuffy Rhodes, who has absolutely nothing to do with Ichiro`s record.  What did Tuffy ever do to Rose to deserve that?  Regardless of what he really thinks, it would have cost nothing to Rose to have simply wished Ichiro the best and then shut up about it.  But Rose being Rose, he had to dump all over what should have been Ichiro`s day in the sun.

More importantly though, judging from what I am reading across the internet Rose`s comments have unfortunately framed the debate on how Ichiro`s accomplishment should be viewed.  This is unfortunate not only because it was rude, but because he frames the debate in a way that deliberately prevents any sort of rational discussion about what Ichiro has done and instead focuses it on largely irrelevant observations which have nothing to do with Ichiro.

Before I get into discussing the substance of what Pete Rose, and a lot of writers, are saying, I`d like to return to the Hank Aaron and Sadaharu Oh story because it offers some interesting insights on what a comparative debate about records achieved in NPB and MLB should look like.  To start with the basic facts, Oh hit 868 home runs to Aaron`s 755 (and Bonds` 762, I focus on Aaron because most of the debate played out when he was the home run champ still and not as an intentional slight to Bonds).  People in the Oh camp who think he should be considered the `king` (ironically, that is what Oh means in Japanese) point to the simple math (868 is more than 755), to the fact that Oh played in shorter seasons than Aaron, and that relative to his nearest NPB rival (Katsuya Nomura who is over 200 home runs behind) Oh`s record is a unique accomplishment.  Aaron supporters on the other hand can point to the fact that playing in NPB gave Oh some advantages that he wouldn`t have had in MLB – playing in stadiums with smaller configurations and using a compressed bat – which strongly suggest that if he had played in MLB like Aaron he would not have hit so many home runs.

Off the bat it is important to note that these arguments are generally made by supporters of Oh and Aaron rather than by the principals themselves – to my knowledge unlike Pete Rose neither one has ever publicly said anything disparaging about the other`s accomplishments. So good for them on that.  More importantly though, the talking points in that debate all focus logically on the individual accomplishments achieved by each.  While they implicitly involve a comparison of NPB and MLB, the points of comparison are connected to what each actually did (such as the fact that NPB`s smaller stadiums meant that some balls Oh hit for home runs there likely would have just been long outs in more spacious MLB parks).

In other words there is a pretty logical framework in that debate which actually seeks to give the accomplishments of each player (particularly Oh since he is effectively viewed as the `challenger` to the previously crowned king) a due hearing.  The debate on Ichiro in the US, on the other hand, has made any similar inquiry largely impossible because of the way Rose has framed it.

Rose raises two points to disparage Ichiro`s mark.  The first is that because NPB is of lower caliber to MLB, his hits there simply shouldn`t count.  I call this the Tuffy Rhodes defence, his argument basically being that any league in which Tuffy (and others like him) can become a star in must not be worth even considering based solely on the fact that Tuffy didn`t put up impressive numbers in his MLB career.

First off, to my knowledge nobody seriously uses the same line of reasoning when advocating Aaron`s case against Oh.  They cite specific reasons why some of Oh`s home runs wouldn`t have happened in the US and maybe suggest he could have hit 500 if he played in the US but nowhere near 868 (or 755).  What they don`t say is that his career home run total should be considered zero, which is essentially the stance Rose is taking with Ichiro.  More problematic though is the fact that Ichiro has a much stronger case than Oh based on all the evidence we have of his career.  In Oh`s case the assumption is that he would have hit fewer home runs in MLB, which is probably true.  In Ichiro`s case though the evidence we have suggests the opposite – he would probably have had more career hits had he played his NPB years in the US instead.  In all his years in NPB he only had more than 200 hits once.  In the first ten seasons of his career after coming to the US, he never had less than 200 hits.  This is attributable to the shorter season in NPB rather than any weakness in Ichiro as a player when he was in Japan.

Moreover, nobody has suggested a specific way in which NPB`s lower quality to MLB would have given his hit totals an unfair boost.  Smaller ballparks wouldn`t help Ichiro the way they help a power hitter like Rhodes or Oh, and he didn`t use compressed bats either.  A slightly lower quality of pitching he would have faced is about the only possible theory you might come up with, but if that had been relevant we would have seen his performance decline when he switched to facing higher caliber pitching in the US, which didn`t happen.  My view is that the pitching in NPB at the time (before most of the stars had jumped ship to MLB) was probably only slightly lower than MLB and not different enough to have given Ichiro`s performance an unnatural boost in terms of accumulating hits (at least not enough to overcome the handicap of playing fewer games).

The second argument Rose uses is that his minor league totals should be counted too, which means Ichiro still has a way to go.  This is just arbitrary goal post moving on Rose`s part, but if we take it as valid then there are two responses.  The first is that Rose`s time in the minor leagues was time he spent being considered not good enough to play in the majors.  Ichiro`s time in NPB on the other hand was time he spent at the highest level of professional baseball he was able to play in under the rules in force at the time.  So the two are qualitatively different (not to mention the fact that Rose`s hits came at A level or less, which is commonly agreed to be much inferior to the level of NPB).  The second response is that Ichiro`s NPB totals don`t include his own time in the Japanese minor leagues with Orix` 2 Gun team, where he spent most of his first two seasons. So if you are going to add Rose`s minor league totals it is only fair to add Ichiro`s.  Doing so he still comes up a bit short of Rose`s minor/major league total, but within reach.  If he does cross that line, expect Rose to quietly drop reference to his minor league hit totals and revert to the Tuffy Rhodes defence, which for reasons I`ve outlined above is without merit.

To my mind, its fair to say that Pete Rose still has the MLB record while Ichiro has a new, previously unrecognized record of combined MLB and NPB hits.  People can have legitimate debates about which accomplishment they view as more significant, but to accept Rose`s argument that we can just dismiss Ichiro`s record out of hand simply because NPB is of lower quality to MLB is grossly unfair and, more importantly, probably leads to the wrong conclusion.

Part of the reason Rose has been able to control the debate is the sheer lack of knowledge on the part of American sportswriters about the Japanese game.  The argument that it’s a lower league and therefore shouldn`t be counted provides an easy out for them that avoids the need to actually sort through the evidence and try to figure out how to evaluate it.  Its telling that experts on Japanese baseball aren`t part of roundtable discussions like this one, which essentially involves a bunch of people who are only familiar with MLB deciding that only MLB hits should count.  Surprise surprise.  I`m not entirely certain myself which record is more impressive, but I am convinced that the way the debate is unfolding is extremely biased against Ichiro in ways that have no rational backing but which overwhelmingly give Pete Rose the benefit of the doubt.  What a long way debate has come from the days of comparing Aaron and Oh…..