Why isn't this a rookie card? 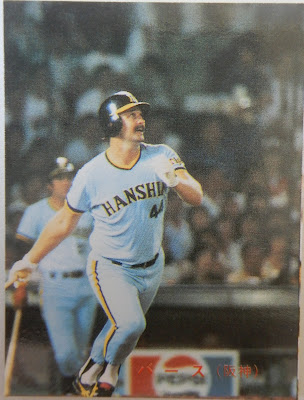 This is a 1983 Calbee Randy Bass card that I have in my collection.  Its my favorite card of his.  There are a lot of Calbee cards from the 70s and early 80s which have that Pepsi sign, which I think was in Korakuen Stadium, in the background and it provides a kind of striking backdrop to a guy swinging a bat.

This is also his first Japanese card (or at least one of them, he has a few in the 83 set), but its not considered his rookie card.

Sports Card Magazine for some reason explicitly excludes foreign players en masse from having their first card designated as a rookie card.  Only Japanese players are allowed to have rookie cards in Japanese sets.

This rubs me the wrong way.  Of course Bass already had cards from his MLB days but that is besides the point - Japanese players who go to MLB usually have previously issued cards from their NPB days but that doesn't mean that their first MLB cards aren't recognized as rookie cards in the US.  Also, this rule applies even to guys who have never appeared on a MLB card, as is the case with some foreign players who came straight from the minors or other leagues.

I can't tell if this is being driven by some anti-foreign sentiment - an extension of the view that foreign players are just temporary helpers and not really members of whatever team they play for, so they shouldn't have rookie cards either because its not "their" league after all.  Or is it more part of an inferiority complex - a lot of these guys did play for MLB teams so their first card as an NPB player is them taking a step down the career ladder rather than up like most rookies are. So maybe not designating their first card a rookie card is meant to be more an act of deference rather than exclusion.

Either way, I think its a stupid rule and this card perfectly illustrates why.  Randy Bass had a very short MLB career, but was one of the best players in NPB during the 1980s, racking up numerous important records (and famously being shut down in his quest for the big one).  He is literally the central figure in one of the biggest legends in Japanese baseball history (the curse of the Colonel). His career is defined way more by his time in NPB than MLB, yet this rule means he doesn't have an NPB rookie card.  I'm not necessarily saying the question of whether a guy has an NPB rookie card is super important, but to me the only sensible definition of an NPB rookie card is that it be the first regular card of an NPB player, regardless of where they come from.