We need to have a word about Eiji Bandou 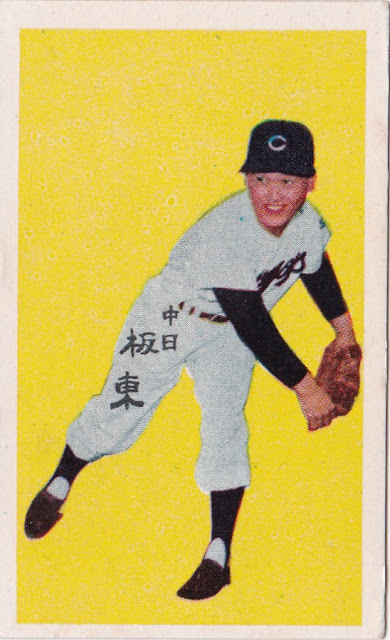 If you collect old Japanese baseball cards from the 60s you've probably got a fair number of cards of Eiji Bandou in your collection.  Bandou isn't a hall of famer and isn't really a hall of very-gooder either.  In an eleven year career with the Dragons from 1959 to 1969 he compiled a respectable 77-65 record and was a solid starter for a few years.  He never led the league in anything.  His best season was in 1967 when he went 14-6 with a 2.55 ERA and made the All Star team.

If you live outside of Japan you probably have no idea who this guy is and based on his career and his almost empty English Wikipedia page you'd probably consider him a common card.

But if you live in Japan, you know this guy probably as well as you know Sadaharu Oh.  Actually, probably better than Oh.  He is a household name whose face is instantly recognizable to almost everyone in the country.

If you take a look at almost any baseball card he appeared on, he has a huge smile on his face (like he does on the above, his rookie card from the 1959 Marukami JCM 31c Type 1 set).  I don't think I've ever seen a card of him without that huge smile.

He was able to parlay that smile into a post-retirement career as a TV celebrity ("talento").  Despite his modest pro-career, he was quite famous in Japan from his high school days.  In 1958 he set a record at the Koshien tournament by striking out 83 batters, a record which still stands and which made him a household name (high school baseball is big here, like college basketball in the US). This helped him break into showbiz after hanging up his spikes.

Over the years - until 2012 -  he was the host or appeared in dozens of variety shows and TV dramas.  He was the host of Sekai Fushigi Hakken (Discover the World's Mysteries), a weekly program that debuted in 1986, for more than 25 years. It is hard to under-state how prevalent he was on TV here, his Japanese Wikipedia page lists dozens of TV shows that he was a regular on, which is insane. Japanese TV isn't like American TV, most of the programming consists of a mix of variety or quasi-reality  programming in which panels of random famous people sit and make amusing comments about whatever the topic of the show is.  On pretty much any day of the week between the 1980s and 2012, you were likely to find Bandou either hosting or sitting on the panel of one of those types of shows (which usually have nothing to do with baseball).  No other ballplayer has come close to matching him as a TV star.

Then 2012 happened.  He was appearing on so many TV shows and splitting his time between Tokyo, Nagoya and Osaka as he rushed between the cities to appear in various local programs that he....uh.....forgot to pay his taxes.  Or something like that - the TLDR version is that the Nagoya tax office (his main residence is here) found that he had failed to declare about 75 million Yen in income.

He didn't go to jail or anything, but this was a big scandal.  This was made all the bigger by the fact that the...uh...PR posters used by the tax authorities to encourage people to go to the tax office to file their tax forms featured....uh.....a familiar smiling face: 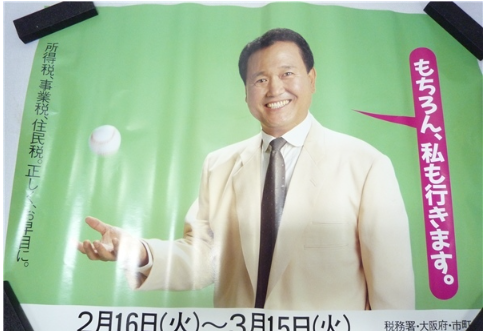 Ha!  Irony, gotta love it.  (Incidentally these posters are kind of collector's items now, you can buy them on Yahoo Auctions).

This put a pretty huge dent in his TV career as most of the shows he was on dumped him.  In a familiar pattern that most celebrity scandals in Japan follow however, after about a year in exile it was deemed that he had showed proper contrition and was allowed back into the celebrity TV circuit, though he isn't as dominant as he was previously (of course he's also getting old, he turned 80 this year).

As part of his comeback he started a YouTube channel where he does stuff like have a pitching contest with a woman about 50 years younger than him:
He seems to have moved on from that though as the last upload was in 2017.  At any rate, you can see what he looks like now in it!

So anyway, next time you are flipping through a stack of menkos from the 60s, take a look out for that smiling face as its probably the most famous one in the bunch!
Posted by Sean at 8:38 PM