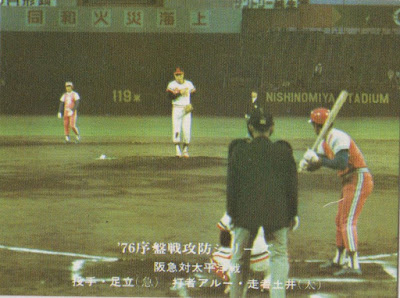 Matty Alou is arguably one of the best foreign players to ever come to Japan, though for some reason he isn`t often mentioned in most lists of the greats of his generation to make the trip like Frank Howard, Clete Boyer or Willie Davis.  He had a long and successful MLB career that included an NL batting crown, a couple of all star selections and the fame that went along with being a member of arguably the most talented baseball family in history.

He played for three years with Taiheiyo in the mid 70s at the tail end of his career, and he appears in the monster 1975-76 Calbee set.  I finally picked up one of his cards from that set, #542, which features him batting against a Hankyu pitcher named Ashikaga on April 28, 1976 in Nishinomiya Stadium (the runner on second is Masahiro Doi, who appears on another card from that set which I have written about before).

Frustratingly the back of the card, while telling us that Taiheiyo won a come from behind victory, doesn`t actually tell us what the outcome of this at bat was, though it might be inferred that Alou drove the runner in.  Its kind of a cool in-game picture, with the funky Taiheiyo uniforms and Nishinomiya Stadium looking characteristically under-packed - you can count exactly 3 people sitting in the stands in right field.  The all dirt infield looks cool, I wish more stadiums today had them.