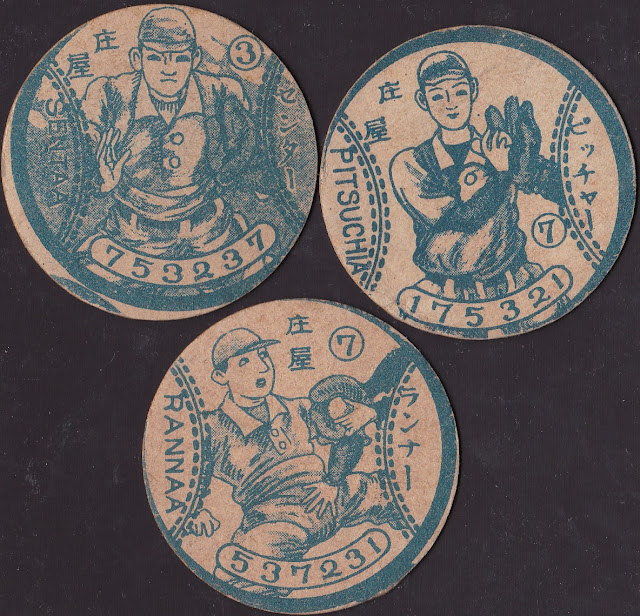 I have been a bit inspired by Ryan's recent post about uncatalogued menko to do some more of mine.  These are three which I think are from the 1930s and feature generic players.  They use  archaic English spellings of the positions which, along with the uniform style and another thing I will detail below, helps to date them. "Sentaa" is center fielder, "Pitsuchia" is pitcher and "Rannaa" is runner.

The backs feature guys in yukata  sitting docilely both with and without firearm. 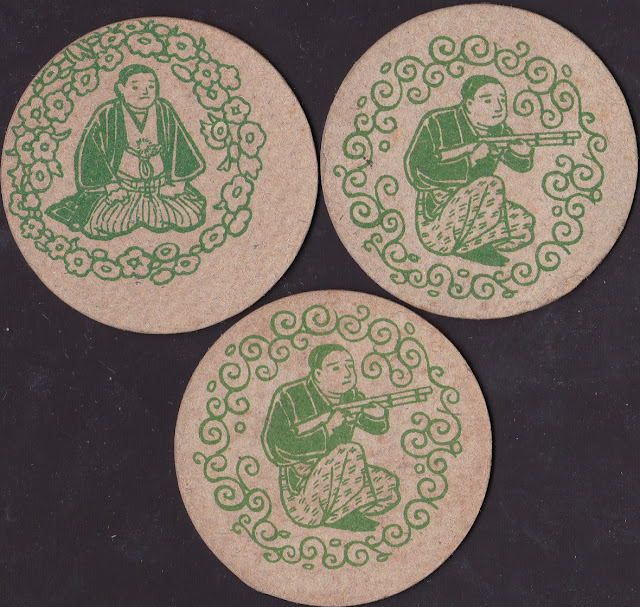 One really interesting riddle that has been bothering me, which it turns out also helps to date these as pre-war, is the characters 庄屋 ("Shouya") which appear on the front of all three cards.  This is an old word that doesn't get used in contemporary Japanese and refers to the position of village headman during the Edo period (1600-1868).  You see it sometimes on pre-war menko (for example, the set Engel catalogues as JRM 41 also has them), but almost never on post-war ones.  This got me curious so I did some digging around on the Japanese internet to find out what was up with that.

At first I thought it might be the name of the company that made them, but no. Its actually part of a game.  People used to play a game called Kitsuneken which is very similar to today's Janken, better known as paper-rock-scissors in English.

In Kitsuneken you have three different plays:  Fox, Village Headman and Hunter. Fox beats village headman, who beats hunter, who beats fox.  Just like the circular paper/rock/scissors hierarchy of plays.

Cards from pre-war sets often have the kanji for those three plays:  庄屋 for village headman, 狐 for fox or 鉄砲 for hunter (literally gun).  Coincidentally all three of the ones I have feature the village headman, but looking through my collection I have cards from other pre-war sets with the other two as well.

The game has a long history, this is an 1820 woodblock print by Kikukawa Eizan of some geisha playing it.  As you can see, the hand gestures for each play differ significantly from modern Janken.
Kitsuneken and Janken (paper/rock/scissors) were originally merely two variants out of a large number of similar games that developed in Japan during the Edo period.  But most of them, including Kitsuneken, were quite formal and required the players to sit seiza style (a very uncomfortable Japanese way of sitting, especially for those of us with bad knees, Japan. Just sayin.).  After the war all of them died out except for Janken, whose survival is likely attributable to the fact that it can be played casually with simple gestures and thus it became quite popular with children.

And now you know that if you find a menko with one of those characters on it, it almost certainly dates to the pre-war (or possibly very early post-war) period.