That Escalated Quickly: Unsettling Auction Result a Threat to My Quest? 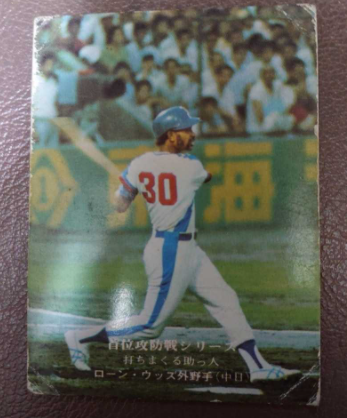 My quest to complete the 1975-76-77 monster Calbee set has made some decent progress over the past month, I picked up a few additional cards last week which I'll have to do a post about.  At the same time however, I was blindsided by the results of an auction that ended yesterday for a card that I (thank god) already own.

It was for the above card, #71 featuring Ron Woods.  I  did a post about this exact same card last year.  Its from a rare series that was only issued in the Tokai area (where the Dragons play) and is thus among the harder to find cards in the set (which is why I was watching the auction despite already having the card, since they are rare they only pop up for auction occasionally and I like to keep tabs on how much they go for).

The copy of the card that I picked up last year is in really nice shape, like probably Ex or Exmt (which is rare for 1970s Calbee cards).  I don't remember exactly what I paid for it but I think it was in the 2,000- 3,000 Yen range which is (or was) typical for cards from that series. 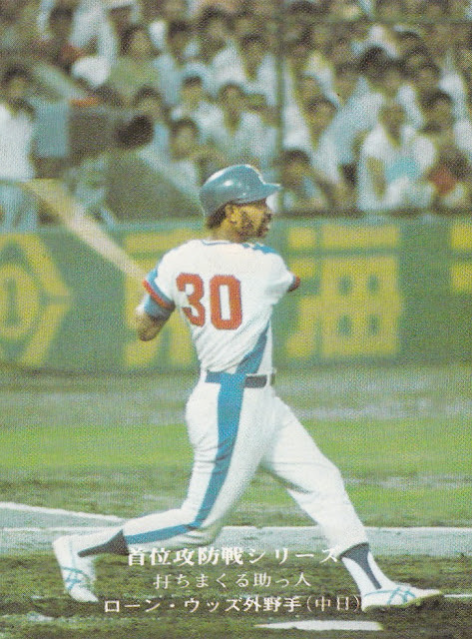 Since the card in yesterday's auction is in  lower grade - maybe a G or so due to those corner creases - I was expecting it to go for a bit less than what I got mine for.  Boy was I wrong, this was how high the auction went: 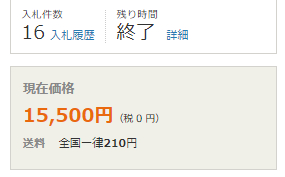 I should be happy about this (and yay, a card I have is more valuable, I'm happy!)  but I'm also worried about what auction results like this might portend for my quest to finish the set.

With the rare Tokai regional series that this card is a part of I am still missing 12 cards (one of which also features Ron Woods).  Until now I've been expecting they would set me back maybe 2-3,000 Yen each in mid-grade condition (less if in lower grade), but this makes me wonder if that will be feasible.  If they are going to cost me anywhere near 15,500 Yen each there is no way I'll be able to afford them.  So far as I can tell this auction result is a bit of an outlier, I've never seen a card from the set sell for more than 10,000 Yen and maybe the seller was just lucky to have two guys who desperately wanted that specific card right now bidding each other up over it.  But its also one of those things where once that line has been crossed, no doubt others will follow.

Even more worrisome is that there is another series in the set, the Red Helmet series (609-644) that was only released in Hiroshima and usually sells for even more than the cards from the Tokai series.  I'm only about half-way there on completing that series and was hoping to finish those without spending more than 3-4,000 Yen (30-40$ US) per card, but if a card from the Tokai series can go for over 10,000, then definitely cards from that series can too.  And, again, at those prices the set becomes unaffordable to me, barring some huge pile of cash unexpectedly falling from the sky into my back yard or something (one can always hope).

On the plus side, auction results like these do make me quite glad that I started my quest to build this set a few years ago and have already knocked a decent number of cards from the rare series off my want list!  If I was looking for a set to start working on today, prices like these would have discouraged me from even trying.