Just how Rare are Calbee Cards? 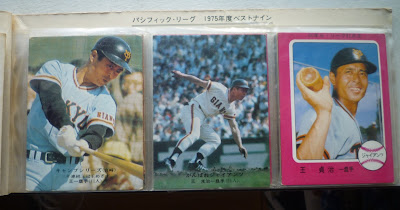 I was intrigued to read this article in the Asahi Shinbun last year which stated that Calbee baseball cards had cracked the 1 billion cards sold mark in 2012.

It is so rare that one gets a hard number to work with for how many cards a company produced in a given year.  This, of course, is actually a print run for 40 years but it does provide some tantalizing ways of trying to figure out how many Calbee cards were produced each year and how many might still be out there.

First it is worth noting that while 1 billion sounds like a lot it actually isn`t.  There exists no definitive answer to the question of how many cards the big US companies were cranking out each year, but the consensus seems to be that for the junk wax era they were making millions of copies of each card. Given 792 cards per Topps set, that means that a single set like the 1989 Topps set alone probably had more cards printed than Calbee has made in its entire 40 year existence.

That said I guess we can approach the numbers from the most obvious and simple direction.  If we divide that 1 billion number evenly over the 40 year history we get a print run of 25 million per year.  With roughly 18,000 Calbee cards having been issued in that time frame you get an average of 55,500 copies of each individual card.

Of course there is a lot of variation which makes that number problematic.  First there was wide variation in the number of cards issued each year, with some of the early sets in the 1970s having more than a thousand cards while some sets from the 80s and 90s had fewer than 400.   Then we have to additionally factor in the fact that the number produced each year would have varied quite a bit.  The Asahi article notes that the 1987 set was a good seller because the Giants won the Series that year while the 2002 set didn`t sell so well due to the popularity of the World Cup that year, which Japan co-hosted with Korea.

Still though, that 55,500 number is quite low compared to American sets.  Even sets from well before the junk wax era, like the 1960 Topps set, are estimated to have had print runs about 10 times larger than that.

I did a little look at the availability of cards from the first five years of Calbee sets (1973 to 1977) on Yahoo Auction compared to the availability of cards from the first five years of Topps sets (1952 to 1956) on Ebay.  With the American ones I did this by simply doing searches (`1952 Topps`, etc) in the baseball cards section on Ebay.  I did a cut off for only cards above 10$ to weed out most of the cheaper modern repros that get improperly listed, but these numbers probably contain a few of those.  With the Japanese ones I followed the same process (`73 カルビー, etc) but I didn`t need to set a price cut off since there were so few and I could just browse through to spot any fishy looking entries

The numbers are pretty crazy:.

And, of course, the 1952 Topps set is one of the hardest post-war sets out there to complete.

When you look at complete sets available online there is a big difference too.  There are hundreds of complete or near-complete Topps sets  from the 1950s or 1960s available on Ebay at any given time (not many 1952 Topps sets mind you, but plenty from the later 50s onwards).  With Calbee on the other hand there are a grand total of zero complete sets from before the year 2000 available on Yahoo Auctions at the moment, which is pretty normal.  There are a couple of sets from more recent years like 2005 and 2007, selling for several hundred dollars and that is it.

So the bottom line is that Calbee cards, particularly the older ones, are just insanely hard to find when compared to American sets from the 1950s and 60s.  This is not surprising given the smaller size of the Japanese market, but kind of interesting nonetheless.
Posted by Sean at 2:45 AM