Talking About Articles is Worth a Read 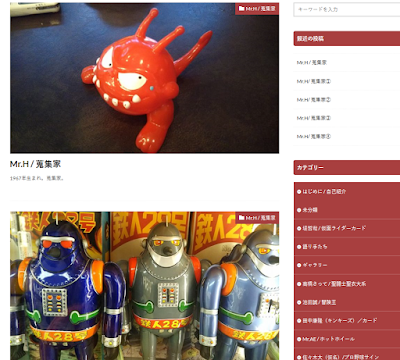 In my travels around the Japanese internet I recently discovered one of the most interesting blogs relating (partially) to baseball cards around.  I mention it here because it has an English version which as far as I can tell has yet to be discovered by the English language internet, but it is absolutely worth checking out.

It is called "Talking about Articles", a direct translation of its Japanese title モノを語る, which is the perfectly awkward-sounding-in-English title for it.  It has a poetic charm to it, which is reflected in the writing used throughout the blog.

It is written by the wife of a collector who after surviving the devastating 3/11 earthquake decided to take a part time job at Mandarake, a chain of collectible stores across Japan.  I've visited a few of their locations (and convinced Dave to check out their Nagoya location on his recent trip here)  since they have, in addition to vintage Calbee baseball cards, a lot of other cool older stuff that I like to collect (notably retro video games).

Her self introduction starts off with the most devastating portrait of life as the wife of a collector I have ever, or will ever, encounter:


"I have lived as the wife of an enthusiast for many years.
I have been looked on by my parents and siblings with pity.
I have been looked down on because my lifestyle is eccentric.
Whenever we take a family trip, I must follow my husband to some collector's shop.
I continued eating a lot of potato chips which had been sold with cards for several months.
When I look back on it, I can surely assert that there were almost nothing but negatives in everyday life."

Its reads almost like a somber lament from the tragic hero of a medieval tale like the Genji Monogatari or something (in fact she later cites these in her intro).  The female protagonist who must stoically endure being partnered with a male who is indifferent to the fact that almost everything he does rains suffering down upon her in one form or another.

She later describes how, from this early state of misery, she came to understand the nature  of collecting:

"I noticed that the act of buying and selling articles includes the fight to make the articles survive in days to come."

And its darker side, noting that the collectors around her, including her husband "bet their life to believe in the value of the articles, create the value of articles, ruining their own lives in the process."

But the fascinating thing is that her blog is dedicated to her interviews with individual Japanese collectors, what it is that drives them to collect what they collect and how their lives have interacted with and been shaped by their collecting passion.  She interviews everyone from manga collectors, baseball card collectors, autograph collectors, even to Hot Wheels collectors.

You won't find any detailed info about baseball cards per se in her blog, it is all about the lives of collectors in general, which is a really interesting take, written from the perspective of a demographic whose voice is really lacking in the online world of collectors blogs (in both Japanese and English). This is important because her interviews are not from the perspective of a fellow collector like most "interview with a collector" type blog posts are, where both interviewer and interviewee tend to have the same understanding of the underlying topic.  She mercilessly prods her subjects in ways that often highlight the ludicrousness of their collecting endeavors. No punches are pulled.  Her interview with the proprietor of Kinkees, a shop in Osaka dedicated mostly to vintage Calbee cards is a must read for Calbee collectors though.  I HAVE to visit that shop someday, I only recently became aware of its existence.

Navigating the blog is a bit tricky at first (each post is broken up into several posts), but once you get the hang of it (click on the "categories" instead of trying to navigate it like standard blogs, that way you get the whole series of posts about a given person's interview), its quite neat.  I recommend taking a look at it.