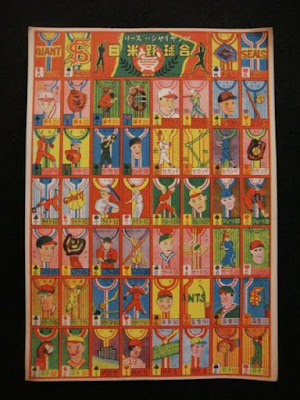 I made another interesting find on Yahoo Auctions the other day.  It is  an uncut sheet of playing cards featuring players from the 1949 Goodwill tour of Japan by the San Francisco Seals.

The tour was led by Lefty O`Doul, who had also organized the more famous pre-war tours by American all stars like Gehrig and Ruth in the 1930s.  The 1949 tour is considered quite important in Japan though since it was the first such tour after the war and in fact occurred while General MacArthur was still in charge of the country.

The Seals played 11 games, including exhibition games, during the tour against a variety of teams including the Giants, an all star team from pro yakyuu, American military teams and college all star teams, winning all but one game.  The games were played in Tokyo, Nagoya and the Kansai region in Korakuen stadium (Tokyo), Koshien Stadium (Kansai), Jingu Stadium (Tokyo), Chunichi Stadium (Nagoya) and Nishinomiya Stadium (Kansai). The cards in this set feature players from the Seals and the Giants, who played only one game against each other during the tour (on October 15, 1949, won by the Seals 13-4). 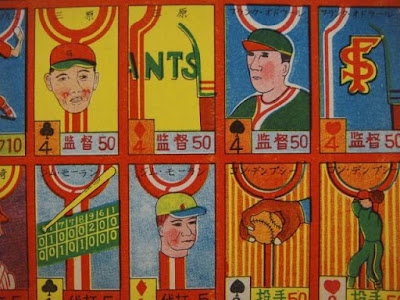 Another interesting fact about the above image is the card on the lower left, featuring the scoreboard.  The inning numbers don`t make any sense, they run 7-7-8-9-6-1.  I can`t figure out any interpretation of that order which makes sense, I assume the person who did the artwork probably wasn`t a baseball fan.  Also the Seals` pitcher Dempsey, featured on the cards immediately below O`Doul, is rendered as having a fairly hideous looking 3 fingered set of claws for a pitching hand.

Its hard to find lineup information for these games on the internet (at least from my 15 minutes of Googling, which turned up lots of generic articles about the series but none that offered any details).  The Japanese Wikipedia page does offer some more information though, so I thought I`d try to translate the lineup of each team featured just so that it would exist in English on the internet somewhere (my transcription of the Seals player names is probably wrong in a few places, its hard to convert katakana accurately back into the original language. If anyone can, please correct these. The Japanese player names I am confident in).

Dempsey got the win for the Seals, while Kawasaki took the loss for the Giants.  Westlake and Bessho each connected for a home run.  The game was played in front of a crowd of 45,000 at Korakuen Stadium.