Baseball Card Prices are Getting Crazy in Japan Too 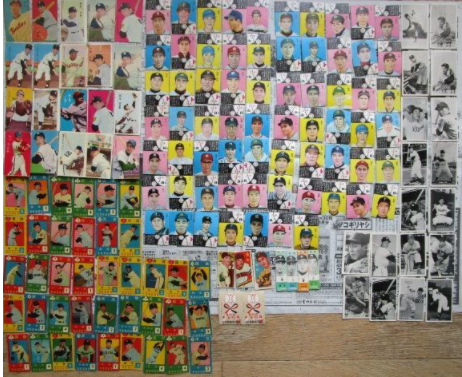 I've been reading a lot about how baseball card prices in the US have exploded over the past year on various forums, blogs and social media.  It was kind of weird, as the economy crumbled and millions lost their jobs, the price of cards went up.

The same thing has happened here in Japan as I've kind of alluded to in a few posts.  Prices just ain't what they used to be.  One auction I was following which ended yesterday really drove that point home.  It was for the above lot of 151 menko from the 1950s and early 60s.

This was a pretty amazing lot actually.  Most of the cards weren't too hard to find, but the highlight was a big lot of 1962 Tachibana Seika (JF 31) cards, these ones here: 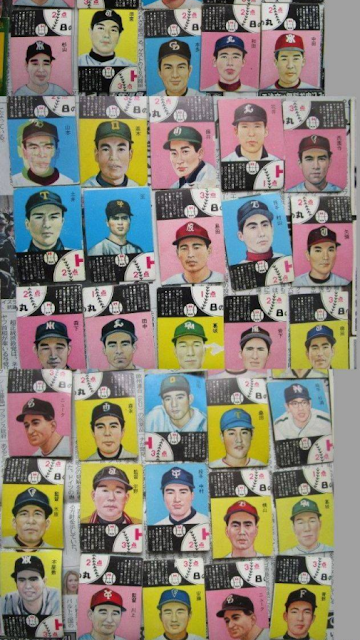 This is an extremely rare set, Engel lists it as R4, meaning that fewer than 10 copies of each card are known to exist.  I don't have any cards from it in my collection, they almost never turn up in auctions, let alone a lot this size.

There are three key cards in this set:  Sadaharu Oh, Larry Doby and Don Newcombe.  The Doby and Newcombe cards are of particular interest since they played only briefly in Japan and only appear on a couple of cards, and this set basically has their "key" Japanese cards.  The Newcombe in particular Engel says is even rarer than the rest, giving it an R5 designation (fewer than 5 copies known).

This lot had not one, but two copies of that Newcombe.  See if you can spot it in the picture.  It also had doubles of the Oh card, but no Doby.

There was an absolute feeding frenzy that played out last night. On Yahoo Auctions there is no sniping, if someone enters a new high bid on something with less than 10 minutes left on the clock the system automatically adds 10 minutes to the auction.  Several bidders kept outbidding each other which had the cumulative effect of adding hours to the auction. I was up late watching, its almost like a spectator sport.  It was way out of my price range so I wasn't in the race.
They ended up putting in 173 bids and driving the price up to 341,000 Yen, or about 3400$ US (plus 210 Yen for shipping). 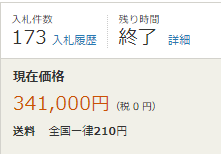 This was probably a good deal given how valuable just the Newcombe cards alone are, if I had that kind of money I might have even been tempted to push it a bit higher.  Probably to Americans this price seems pretty modest given the gobsmacking insane prices high end stuff there are going for these days, but for Japanese vintage this is a big deal.  341,000 Yen I think is a lot more than what this would have gone for a couple of years ago and a good piece of evidence that the same trend going on in the US is going on here too, albeit not to the same degree.