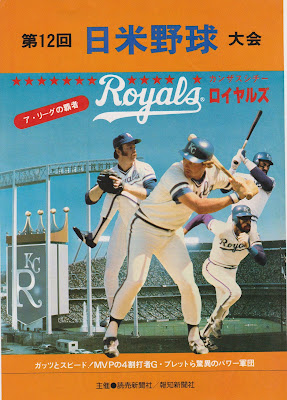 In 1981 the Kansas City Royals went on a tour of Japan, playing games against NPB teams across the country.  The tour didn't exactly go well for Kansas City, which dropped the first five games before pulling off a 1-0 win over the Giants, though they did eventually eke out a winning record (9-7-1) in their 17 games here.  The tour is sometimes cited as evidence that the level of the NPB was catching up to that of MLB at that time. The Royals team was pretty decent (they had about an even record in the strike shortened 1981 season, but had just come off one in which they made the ALCS) yet it barely broke even in its games against Japanese teams. It stood in stark contrast to some earlier tours by MLB teams which had completely dominated their series here.

I have a chirashi of the tour in my collection.  A chirashi is basically a flyer or handbill, about the size of a standard piece of A4 paper.  Japanese chirashi since the 1960s have been pretty high quality and there is an organized hobby of chirashi collectors out there.  Mostly these focus on movie chirashi, which feature amazing artwork advertising films made only for their Japan release (I have a lot of these, they are awesome), but they also make them for other events like concerts (I have a pretty good Rolling Stones one from a 1970s tour they did) and exhibition baseball games like this!

This one is pretty cool, prominently featuring Hall of Famer George Brett front and centre.  It isn't actually a chirashi for the whole Kansas City tour, but rather from the leg of the tour which brought the Royals through the Kansai area.  The back advertises games they played against a mixed Giants/Braves squad at Nishinomiya Stadium, an all Japan all star team at Koshien Stadium, and a mixed Hawks/Buffaloes/Giants team at Osaka Stadium. 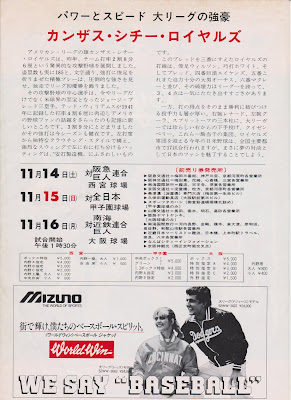 The text on the top draws particular attention to the fact that George Brett had recently come close to being the first Major Leaguer since Ted Williams in 1941 to bat .400 (he hit .390 the previous season).  Dan Quisenberry, Willie Wilson, Frank White and Willie Aikens also get name-checked in it, but the vast majority is about Brett.

Kind of a neat piece of US-Japan baseball history!