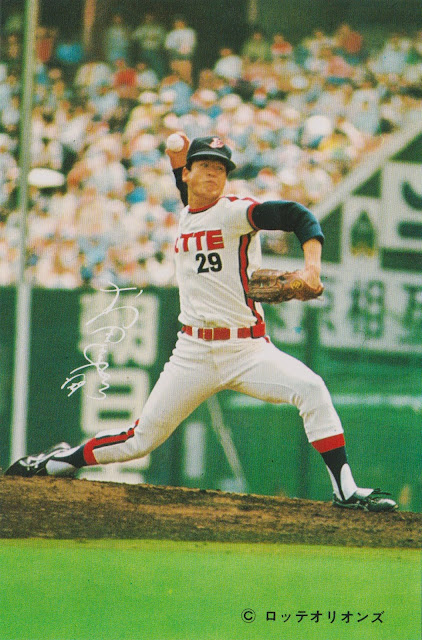 In addition to Calbee cards from the 70s and 80s, recently I've been focusing my collecting efforts on Yamakatsu cards from the 70s.  They are a nice compliment to a Calbee collection since they are so.....unpredictable.  Yamakatsu only produced baseball cards for a six year stretch between 1975 and 1981 and in that time period they produced 19 sets (according to Engel).  Do you know how many of those 19 sets are standard sized baseball cards?  One! The JY 6 set issued in 1978 is their only set made up of cards with anything close to standard card dimensions, an occurrence so unusual for Yamakatsu that Engel actually makes note of it in his description of the set.

Even Bigger card sets the size of 8 by 10 photos like these beauties.

Yet bigger still  sets whose card size is comparable to the landmass of some of the mid-sized 19th century pre-unification German principalities, like these which are probably the biggest regular baseball cards ever made.

Cards with metal badges in them like this baby that my scanner had a bit of trouble handling but I can assure you is totally awesome: 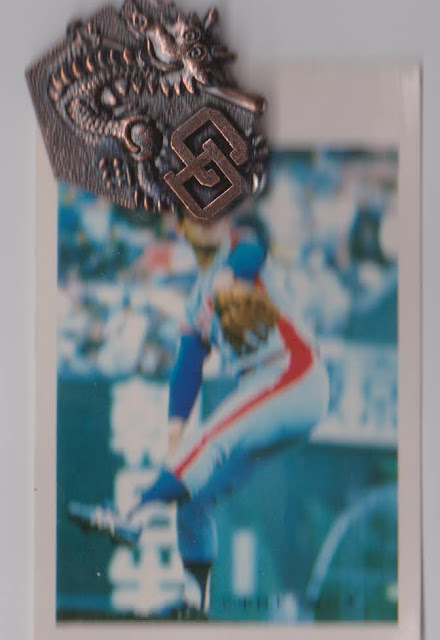 Then you've also got the tiny cards like the 1979 and 1980 sets where they made the unusual choice of going from making the largest cards in history to the smallest almost overnight.

There really is no parallel for a card maker experimenting with such a wide range of card sizes and designs in such a short period (or over a long period for that matter).

This also gives anyone collecting Yamakatsu an interesting point to brag about: These are the most difficult cards in the world to collect by far.

That isn't to say that they are the rarest or most expensive: they aren't.  But they are the most difficult in terms of the one thing card collectors fret more about than any other: how to store them!

Its so cute to see American card collectors constantly struggling to figure out how to store their pre-1957 cards because they are a fraction of an inch larger than post-1957 cards.  Ha!  The Yamakatsu collector has to worry about how to store cards so widely varied in size that the largest is about 40 times bigger than the smallest, and many sets fall somewhere between those.  Also some of them have jagged metal badges protruding from them which will damage any cards placed next to them in a stack or box.

Its the perfect collector's storage nightmare really.  Which is why I haven't jumped into Yamakatsu collecting with both feet yet.  In terms of set collecting I'm focused on the "Post card sized or smaller" end of things, with a smattering of the larger stuff as part of a type collection.

I just picked up the card at the top of this post, which is a 1978 Choji Murata from the set Engel catalogues as JY10.  Its postcard sized and I've decided to start working on this set because its actually quite beautiful - there are some really great photos in it and the bigger size and glossy surface of them gives them a striking appearance that my beloved Calbees of the same era don't quite match.

The fact that it is Choji Murata is also significant.  He was a popular pitcher (inducted to the Hall of Fame in 2005) who famously was the first Japanese player to have Tommy John surgery.  The story is recounted in Robert Whiting's excellent book You Gotta Have Wa.  From a card collector's perspective though its important because Murata played for the Lotte Orions.  Calbee refused to feature players from the Orions in its sets in the 1970s and early 1980s because their owners, Lotte, were a competitor with Calbee in the food and snack industry.  Murata, who debuted in 1968, thus didn' t have his Calbee rookie card until 1985!  So if you want cards of Murata and other Orions players from the 70s, you have to turn to Yamakatsu or some of the other short term makers of the era like Nippon Ham. 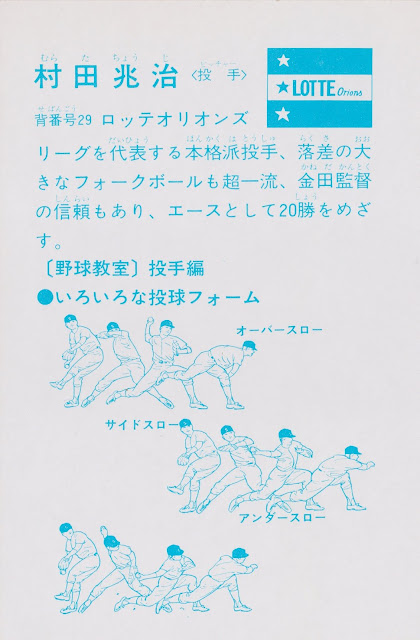 The backs of the cards from this set are also kind of cool.  They feature a little write up about the player and the bottom half is then some sort of a baseball lesson, Murata's demonstrating the difference between pitching over arm, side arm and under arm.

For more info on Yamakatsu sets you can check out Dave's excellent overview post on his blog here.  I'm going to try doing some more posts on my recent Yamakatsu pick ups in the near future.