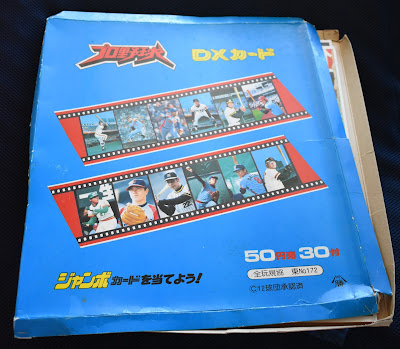 After our visit to Mint Ponyland we realized we had been on our feet for quite some time (especially Dave, who had come down all the way from Tokyo that morning) and it was getting late so we decided to draw our card shop tour to a close.  We had actually taken in 2 out of the 3 specialized card shops in Nagoya.  The only other one, a shop called Match Up near Yabacho station, would have to wait til another day.  Due to poor timing we also missed out on a fourth shop, Caps, which had just closed down in March.

We returned to Nagoya station and made our way over to Dave's hotel as he said he had something to give me.  I was absolutely astonished by what he had: two massive Yamakatsu Jumbo DX cards! Still in their original box! 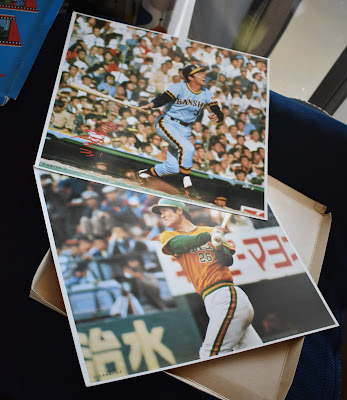 These cards are massive, probably the biggest baseball cards ever produced.  I should have put something for scale in the photo but didn't think of it. So perhaps I'll do the next best thing here and express how big they are with a series of "they so big" jokes:

"Your Yamakatsu Jumbo cards are so big I swerved to miss running over one in my car and ran out of gas."

"Your 1977 Yamakatsu Jumbo card is so big, they only just finished printing it."

"Your Yamakatsu Jumbo cards are so big if you drop one in the ocean off the coast of Okinawa Japan and China will immediately get into a territorial row over who owns it."

"Your Yamakatsu Jumbo card is so big I had to look three times to see all of it."

"Your Yamakatsu Jumbo cards are so big that 17% of seismological activity in the Japanese archipelago is explained by their movement."

"Your Yamakatsu Jumbo cards are so big that when you buy them in bulk at Costco they come in packages of one."

"Your Yamakatsu Jumbo card is so big they make you buy a ticket for it if you want to take it on the Shinkansen."

And on and on (feel free to come up with your own in the comments).

These ones in fact were so big (not a joke) that Dave had to use a specific suitcase big enough to hold them without getting them bent.  How do you thank someone for going to that much trouble to bring cards across the Pacific to you?  It was really the kindest gesture I've ever experienced as a card collector and I just really love these cards and am massively appreciative of them!

The two cards he gave me were of Tomio Tashiro of the Whales and Masayuki Kakefu of the Hanshin Tigers.  These cards are pretty hard to find and, in a bizarre twist, the only one I'd ever actually seen before was the actual Kakefu card that he gave me, which he had featured in a post on his blog a few years ago!

I was a bit worried about getting them home safely since it was raining and they wouldn't fit in my backpack, but fortunately I had some plastic bags that did the trick and they now safely reside in my home.

His generosity didn't end there though, he also gave me these beauties here: 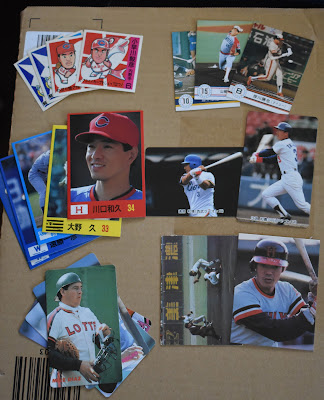 A fantastic set of stuff that just 100% aligned with my interests: some 1989 Mermaid Data cards, two 1994 Calbee Hokkaido-Kyushu-Sanyo cards (veyr hard to come across), and some other vintage Calbee including a beautiful 1979 Yutaka Fukumoto.

We sat in the hotel lobby for a few minutes as I looked through all of these amazing cards, feeling a bit guilty that I hadn't thought to bring him a gift (I will though!!!) and then we said goodbye and I headed for home.

It was a great afternoon, being able to both connect in person with a fellow Japanese baseball card blogger (we're a pretty small community!) and great guy, and to take in some of Nagoya's baseball card shops for the first time.  Dave is now off on the rest of his trip, which he shared some of the details of with me but I won't spoil it here.  Stay tuned to his blog to see some amazing posts, bearing in mind that the  3 posts I've devoted here to it only made up a very small portion of it!