These little Yamakatsu cards are just too cute to resist 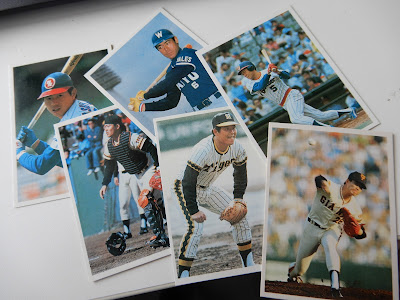 I have a long distance card trading relationship with a collector in the US named Jay.  He sends me Expos cards from the 1970s and I send him Japanese cards for sets he is working on.  I love doing this since its quite fun to get envelopes full of Expos cards from time to time and I also learn a bit more about Japanese cards that he is interested in but I hadn't been working on.  I recently picked up some 1980 Yamakatsu cards that he needed and I was quite taken by them.  The 1979 and 1980 Yamakatsu sets are pretty neat - they are about the same size as Calbee cards from the 1980s and basically everything that draws me to vintage Calbee cards draws me to these Yamakatsu ones too - simple design and colorful photos featuring in game action on the front, simple backs with a brief write up on the back.  What is not to like? 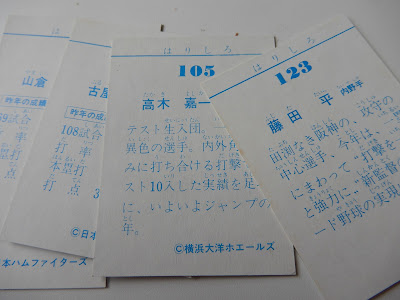 So I decided to jump into the fray and bought a few cards from the 1979 set (and one from the 1980 set which Jay didn't need).  All I can say is that I love these little things!

These aren't the first Yamakatsu cards I've bought, I actually already have a 1978 set on the go, but those are larger cards (also awesome, I have to do a post about them too sometime), and I also have a couple of the post card sized ones including my only Japanese card of Willie Davis.

As is always the case, Dave has done a great overview of the Yamakatsu cards on his blog so I won't go into the details.  The 1979 set has 128 cards and the 1980 set has 64 and I don't think there are any hyper rare short prints, so compared to Calbee sets of similar vintage collecting both should be a manageable goal, and I've already got bids in on some other ones on Yahoo Auctions.  So this is my new collecting project of 2018!

Email ThisBlogThis!Share to TwitterShare to FacebookShare to Pinterest
Labels: Yamakatsu